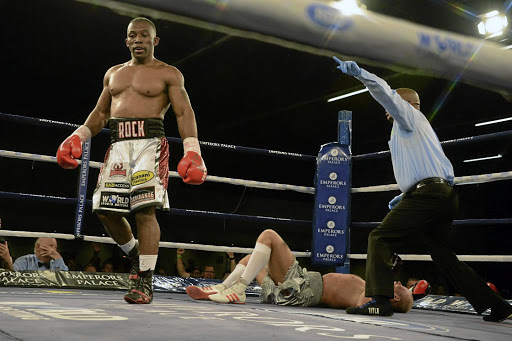 Thabiso 'The Rock' Mchunu walks away after flattening Ricards Bolotniks of Latvia in the sixth round at Emperors Palace on Saturday night. Mchunu next meets Thomas Oosthuizen in September in an eagerly awaited bout.
Image: Frennie Shivambu

SA and ABU cruiserweight champion Thabiso "The Rock" Mchunu is an overwhelming favourite from current and former world boxing champions to win the battle of left-handers against Thomas "Tommy Gun" Oosthuizen.

The eagerly awaited bout is pencilled in for Emperors Palace on September 1.

Promoter Rodney Berman announced two weeks ago that if Mchunu emerged victorious against Ricards Bolotniks last weekend, his next fight will be against the former IBO super middleweight and light heavyweight titlist.

Mchunu flattened Bolotniks of Latvia in the sixth round. Oosthuizen was among the big crowd that attended Berman's "Bombs Away" tournament.

Oosthuizen last fought in May last year when he lost on points to German-based Russian Igor Mikhalkhin for the IBO light heavyweight title in Germany. Hekkie Budler, Isaac Chilemba, Dingaan Thobela and Jan Bergman have all tipped Mchunu to win against Oosthuizen.

"I give the advantage to Thabiso because he has been fighting as a cruiserweight for longer and has been boxing nonstop compared to Tommy who has had a long lay-off," said Budler who is the IBF, WBA Super and Ring Magazine junior flyweight champion.

"Tommy, at his best, can beat anybody in the world."

IBO cruiserweight holder Kevin Lerena said: "Thabiso comes off a good win. He does not need a warm-up; he's ready and he's got good skills. Tommy is a very good fighter, but has had a long lay-off."

Chilemba, who drew with Oosthuizen in 2010, said: "I put my money on Thabiso who is a smart fighter. Tommy has been out for a while. I wonder really if he will handle a guy who has been active."

Thobela said "it will be a very awkward fight but I will put my money on him [Thabiso]".

Bergman said he favours Mchunu as Oosthuizen "needs to come out stronger and knock Mchunu out because he cannot beat Mchunu on points".

Mchunu and Oosthuizen helped each other with sparring some time back.