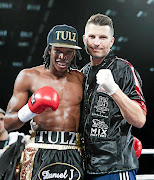 Top Gauteng top boxing trainer Sean Smith has no doubt that his two charges Thabiso "The Rock" Mchunu and Thulani "Evolution" Mbenge will emerge victorious in their bouts next Saturday.

Mchunu, 30, will look at redeeming himself at the expense of 28-year-old Latvian Ricards Bolotniks.

Their fights will form part of Golden Gloves' "Bombs Away" programme at Emperors Palace.

Said Smith: "If Thabiso is able to give the same performance he gave against Johnny Muller [a lopsided points win for both the SA and ABU belts in November], then we will be home and dry. He's got skills, and he needs to win well to make his presence felt again in the cruiserweight division.

"He's had some bumps in his career but we are fortunate that [promoter] Rodney Berman has lined up this opportunity for him to be on such a big show again."

Regarding Mbenge's bout, Smith said: "I think Chavez has slowed down quite a bit from what I saw of him four years ago. But you can never assume that he won't be at his best, just like what happened to Flo Simba against Francois Botha.

"Chaves is going to bring all his experience into the fight and try to make Thulani feel uncomfortable but Thulani is in great shape and is up for the task."