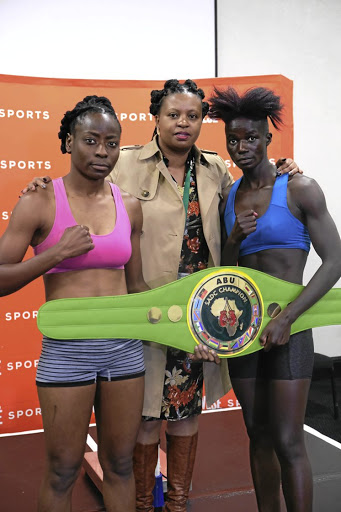 Bongani Magasela previews a weekend boxing bonanza that will see action start in Johannesburg tonight, before moving to Eastern Cape tomorrow and Polokwane on Sunday.

The tournament is part of Africa Month celebrations.

Melissa "Honey Bee" Miller does not have appropriate words to describe the excitement when the Boxing SA belt was wrapped around her waist.
Sport
4 years ago

Hadebe will face Malawian Ellen Simwaka in another female ABU SABC title fight but in the bantamweight class. They will be meeting for the second time. Hadebe won their first six-rounder in Kagiso last September.

Baloyi will take on Danny Feliciano of Namibia in the male section over six rounds in the junior welterweight class. Action will begin at 7.30pm.

On Sunday afternoon, TK Boxing Promotions of Tshele Kometsi will stage a nine-bout card in Seshego.

Topping the bill will be Clement "Slow Poison" Kamanga against Tshifhiwa "Timer" Munyai in a 10-rounder in the junior welterweight class. Kamanga, the SA-based Congolese who is trained by Lionel Hunter, warned that he will not be driving from Joburg to Polokwane to lose.

A band played in the arrivals hall at OR Tambo on Tuesday evening as Hekkie Budler returned home after his historic victory in Japan on Sunday.
Sport
4 years ago

"I am not taking him lightly. But I will not be driving to Polokwane to lose. I trained hard and I am in the best shape of my life. It is gonna be war," said Kamanga, who is on a five-fight winning streak.

Munyai, from Venda, who is under the guidance of trainer Alan Toweel jnr in Johannesburg, blows hot and cold.

This is confirmed by his uninspiring record of nine wins and as many losses.

"A win will put me in line to challenge SA champion Xolani Mcotheli," said Munyai, who is rated No 2. "Kamanga is not a boxer with surprises; he is a one-dimensional boxer and he does not like being put under pressure. That is definitely what I will do from round one."

In other fights, Ronald "King" Malindi will defend his No 1 rating in the bantamweight division against Bongani Bhuti.

Jeff "911" Magagane and Thembani Hobyani will face-off in a lightweight eight-rounder, while Thabang "Pretty Boy" Ramagole and Nyelisani "The Rose of Limpopo" Thagambega will also meet in a non-title fight.