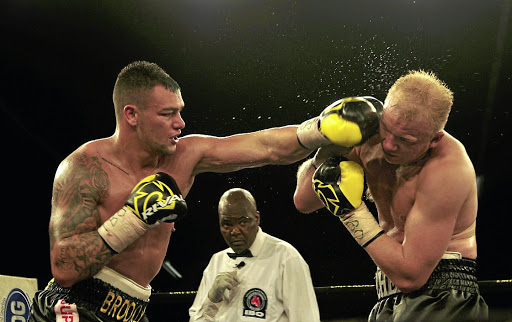 Kevin Lerena connects with a straight left through the defence of Dmytro Kucher.
Image: Veli Nhlapo

It will be a case of brains versus brawn when Kevin "Two Guns" Lerena puts his IBO cruiserweight title on the line for the second time against highly rated German-based Ukrainian Roman Golovashchenko on June 2.

The beauty is that the fight will take place in Azerbaijan which is the neutral venue for both boxers. The 30-year-old challenger, who is undefeated in 10 years, is a powerhouse who has left 17 of his 19 victims counting the stars.

Golovashchenko's only loss was in 2008 in what was his fifth professional bout. He is the former Global Boxing Council, IBO International, IBF East and West Europe and current IBO Inter-Continental champion.

Lerena is an intelligent boxer who is getting better as his career is flourishing. The former WBF Africa, WBC Youth Silver SA, WBA Pan African titlist is not perturbed by Golovashchenko's CV.

"I feel good and strong. When I beat this guy there will be big things to come for me," predicted Lerena. "I had best preparations sparring big guy Ukrainian Vlad Sirenko.

"I'm very confident. I am almost at the top now. The world has seen what I can do. I just need to beat this guy and doors will open for me. We've been working very hard."

Lerena added: "I have seen a little of his footage and, to be honest, I leave that to my trainer. But he is a hooker and strong. Look, it is brain versus brawn. We have a game plan."

Trainer Peter Smith said: "We've had unbelievable preparations. We've worked hard and had great sessions. I am very confident of us retaining our belt."

Lerena and Smith jet off to Azerbaijan on Sunday. Lerena has 20 wins, nine knockouts against a loss.