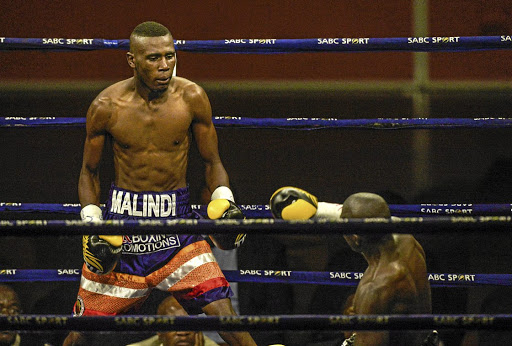 The boxing fraternity is interested to see if this 24-year-old former top amateur - who set tongues wagging when he turned professional in 2013 - is still championship material.

Hopefully that question will be answered on Sunday, when he fights Bongani Bhuti in their bantamweight bout.

The fight will form part of the card that will be presented by TK Boxing Promotions of Tshele Kometsi at Ngoako Ramatlhodi Hall in Seshego, Polokwane.

Malindi, who remains undefeated after 12 fights, was not hesitant when asked what will happen inside the ring against the East Rand-based Bhuti.

"I am going to beat up this guy badly," said Malindi. "The King wants to be crowned and that time is now. I am gunning for the SA bantamweight title."

Malindi is the No 1 challenger for the title that is held by Toto Helebe, who is due to make his mandatory defence in July.

"I abandoned my day job [taxi driving] because I wanted to focus in this fight. I do not want any excuses. I believe that this sacrifice will pay dividends."

Bhuti is no pushover, though. The boxer from the Malinga Academy of late respected trainer Jabulani Malinga always comes fully prepared for war. He has five wins, four losses and a draw.

Meanwhile, trainer Alan Toweel Junior said defeat in not an option for his new find Tshifhiwa "Timer" Munyai, who takes on Clement "Silent Destroyer" Kamanga in the main bout of Kometsi's bill.

"Tshifhiwa realises that it is make or break for him and he's making a lot of effort in his training. This is a fight to resurrect his career," said Toweel, who welcomed the Limpopo boxer to his gym in Linden early this year.

Munyai has been with Lehlohonolo Ledwaba, whom he left after avenging his loss to Thembani Hobyani in December.

Munyai - who suffered a split points loss to Hobyani for the vacant Limpopo lightweight title last year - has nine wins and nine losses.

South Africa-based Congolese Kamanga, who is trained by Lionel Hunter, has eight wins from nine fights.