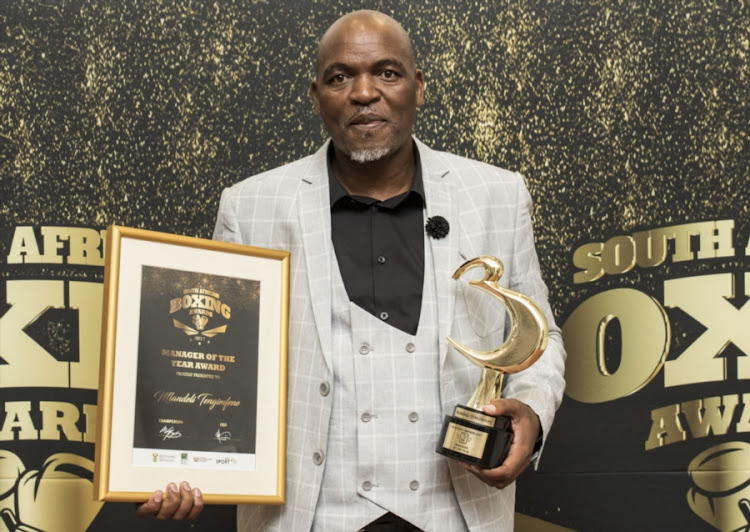 Manager of the year of the year Mlandeli Tengimfene during the 2018 Boxing SA Awards at Boardwalk Casino and Hotel on February 02, 2018 in Port Elizabeth, South Africa.
Image: Michael Sheehan/Gallo Images

Boxing manager Mlandeli Tengimfene says the draw for the money-spinning bantamweight World Boxing Super Series will take place in Germany in July with seeded boxers choosing their opponents from a pot of unseeded rivals.

The confirmed world beaters in the roster for the eight-men tourney are Ryan Burnett of Northern Ireland (WBA champion)‚ Puerto Rican Emmanuel Rodriguez (IBF titlist) and Naoya Inoue of Japan‚ who is the WBO champion but in the junior bantamweight division.

Inoue will make his bantamweight debut on May 25 against Jamie McDonnell‚ and Onou must come out tops to gain entrance into the money spinning series.

Tengimfene manages every aspect of Zolani ‘‘Last Born” Tete’s career and the WBO bantamweight champion will be part of the World Boxing Super Series.

‘‘The trick is if Zolani is seeded Number 1‚ he will then choose first‚” said Tengimfene‚ whose negotiation skills saw Frank Warren‚ the top British boxing promoter‚ sign Tete in 2015.

‘‘If you happen to fight a UK boxer‚ the purse monies are different to win bonuses. It's going to be interesting.”

Tengimfene‚ who retained BSA's manager of the year award in January‚ added: ‘‘The first quarterfinal will be in September/October and the second will be in January/February with the finals taking place in May/June next year.

‘‘Zolani will not be involved in any fight between now and September. He cannot falter.

‘‘Our attitude now is that we take it one fight at a time‚ put it aside and focus in the next.

‘‘We cannot underestimate any of the boxers that will be there but the difference that will work in our favour is Zolani's constant fighting outside South Africa.

‘‘Fighting in Mexico‚ UK and Japan has turned Zolani's nerves to be those of steel. The timing of this series has found Zolani at his best.

‘‘The experience of facing foreign fans is coming up nicely for Zolani. You can put Zolani wherever and against any sort of crowd and he will still jump inside the ring and produce the goods.”

The main prize is four belts and the Muhammad Ali trophy.

The winner will automatically become the undisputed bantamweight champion.

Tete is trained by his father Zolile‚ Loyiso Mtya and Phumzile Matyhila.