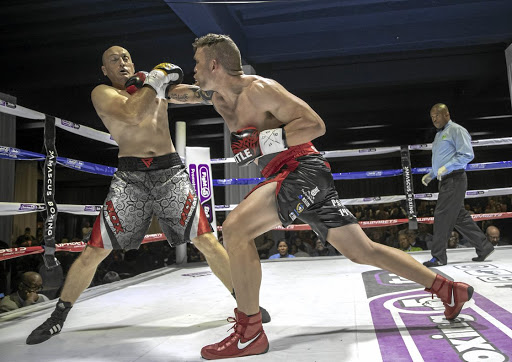 Mike Schutte Junior (right) made a resounding professional debut by viciously sending Petrus Cilliers sprawling to the canvass in round one of their fight in Turffontein at the weekend./ Nick Lourens

Reformed drug addict Mike "The Tank" Schutte junior is delighted to have finally made an introduction to the ranks of professional boxing with a win.

Schutte viciously sent Petrus Cilliers sprawling to the canvas in their fight at Turffontein Hall, southern Johannesburg, on Sunday, where Boxing 5 Promotion staged its maiden tourney.

"It's been a long road for me to get where I am.

"I was always a kick-boxer and I always wanted to transition to boxing, but opportunities were limited," said the son of late former SA heavyweight champion Mike "The Tank" Schutte senior.

"Finally, I showed everybody what I've got and made of," added the 35-year-old boxer who is trained by former light heavyweight professional boxer Lionel Hunter.

Schutte junior's story is a remarkable one considering the journey he has travelled.

"There was couple of times before where I was supposed to turn professional but many things happened.

"I was involved in helping drug addicts since I come from that life myself," he explained.

"I wanted to give back by saying thank you by helping people who are in the situation I was [in] before.

"As a result, I was at [the] crossroads, not knowing what to do. But as a man of faith I believe the Lord opened the door for me at the right time. I think Sunday's fight was a bit of proof not to anyone but myself.

"This is the start of things to come. My focus is on the future not the past."

Going forward, the married father of three warned he's "gonna get better with each fight". "My vision is to go all the way to the top."

He fights in the cruiserweight division where Thabiso "The Rock" Mchunu rules as the SA champion.