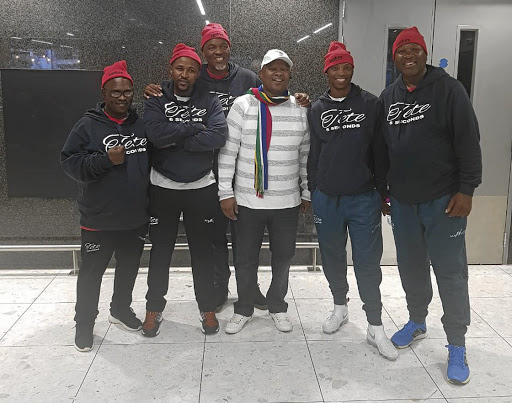 Champion Zolani Tete, second from right, and his team were met at their hotel by SA ambassador Ahlangene Sigcawu (white top).
Image: SUPPLIED

The Northern Ireland's capital is where the knockout artist from Mdantsane left an impression with his 11-seconds knockout of Siboniso Gonya last November.

Tete will bid for the second defence against Argentinian Omar Andres Narvaez at the SSE Arena on Saturday, the same venue where he recorded the quickest knockout in a world championship defence.

Tengimfene said: "We landed safely in Dublin and we immediately drove to Belfast.

"On our arrival at the hotel we were welcomed by SA ambassador, Ahlangene Sigcawu. People still recognise Zolani because they greeted him as we got out [of] the car.

"They said they were looking forward to see him in action again. Zolani promised them to do even more."

Before departing, they visited the home of ANC stalwart Winnie Madikizela-Mandela in Orlando, Soweto on Friday, where Tete and other boxing champions, trainers as well as Boxing South Africa officials laid wreaths.

"I went there to draw strength from uMama [Madikizela-Mandela], who was a fighter herself," said Tete. "It was a spiritual upliftment for me going to her house, and I know how much strength it will give me."

Tete - who holds a belt of one of the four most respected sanctioning bodies, others being the WBC, WBA - broke all the records in world title defence.

Tete's knockout of Gonya was his 21st in 26 wins against three losses.