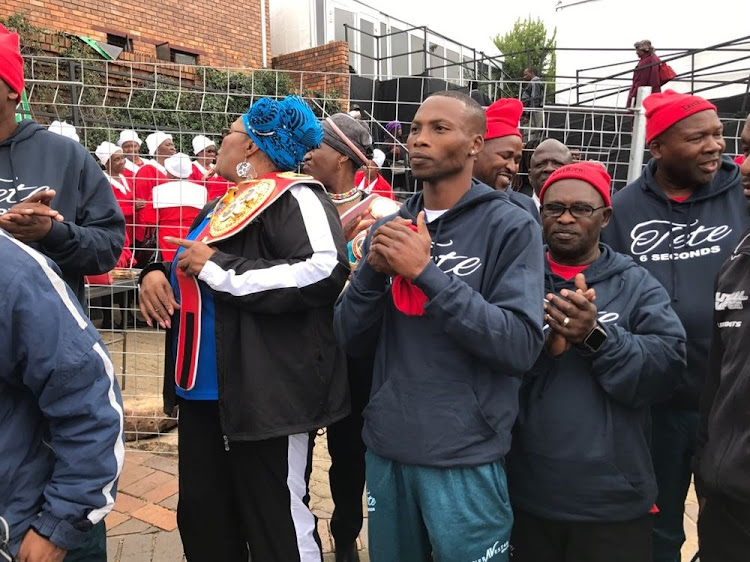 WBO bantamweight boxing champion Zolani "Last Born" Tete is well aware that he will have to be on top of his game when he faces vastly experienced former world champion Omar Andres Narvaez at SSE Arena in Belfast‚ Northern Ireland‚ on Saturday.

But the explosive knockout artist from Mdantsane‚ Eastern Cape‚ said he cannot afford to falter against Narvaez as a defeat would have severe consequences on his future.

Tete went to the late Winnie Madikizela-Mandela's home in Soweto to pay his respects on Friday and then boarded a flight to Northern Ireland afterwards.

"This is a spiritual upliftment for going to the home of such an icon before I fly out to represent my country in Northern Ireland‚" said Tete.

"I am here to draw strength and borrow the courage from Mama."

Tete said he cannot afford to lose the fight as he has numerous plans in the pipeline that would be unravelled by a defeat to Narvaez.

"The guy (Narvaez) has so much experience‚ and that I cannot take away from him‚" he said.

"But there is just so much in the pipeline for me after this fight.

The local boxing public must brace itself for what could become a humdinger of a bout when Lerato "Lights Out" Dlamini and Sydney "The Skeleton" ...
Sport
4 years ago

"That is why I just cannot allow him to be a stumbling block."

Tete returns to the venue where he rewrote the history books in the defence of his title on November 18 when he knocked countryman Siboniso Gonya in 11 seconds.

It was the quickest knockout in a world championship defence.

Tete‚ who boasts 21 knockouts in 26 wins against three losses‚ broke the record of WBO junior featherweight champion Daniel Jimenez who knocked out Harald Geier in 17 seconds in 1994.

The South African will be bidding for the second defence of his belt against the 42 year old Argentinian who boast 25 knockouts in 48 wins against two defeats and two draws.

Tete's win for the WBO title last year April saw him become the only local boxer to hold such a credible world title.

The WBO is one of the four most respected sanctioning bodies.

It had been over a decade since a South African produced a WBO champion - Corrie "The Sniper" Sanders dethroned heavyweight champion Wladimir "Dr Steelhammer" Klitschko in Germany in 2003.

Many local boxers have been constantly winning IBO and WBF titles which do not rank alongside the top four.

The IBO has‚ to its credit‚ been good to South Africa and has given local boxers opportunities to fight for its belts.

The last South African to capture an IBO title is Kevin "Two Guns" Lerena who won the cruiserweight title last year in September against France based Congolese Youri Kayembre Kalenga at Emperors Palace.

In his parting shot before jetting off to Belfast later in the afternoon on Friday‚ Tete said: "I have been told to make sure that I win against Narvaez and there are much bigger opportunities that will be coming my way."

Lejaka said: "We are confident of victory in Belfast. We understand it to be a bigger step towards his bigger mission to unify his belts."

For the second time in three Commonwealth Games‚ South Africa has failed to win a boxing medal.
Sport
4 years ago
Next Article