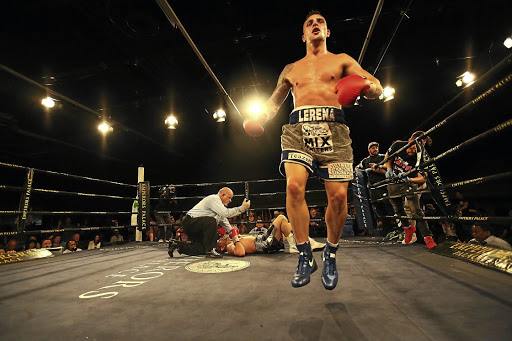 An injury to the elbow has forced the postponement of Kevin "Two Guns" Lerena's defence of his IBO cruiserweight title to be postponed from April 26 to June 2.

The fight against Ukraine’s Roman Golovashchenko will still take place in Azerbaijan. Lerena has bursitis in his right elbow, a painful inflammation that develops over time, in this instance flaring up in the past month.

The supremely built left handed champion, a former horse racing jockey, has consulted a top local orthopaedic surgeon, who is treating him with anti-inflammatories and antibiotics. The surgeon told him that by allowing it to fully recover, there should not be a reoccurrence.

Kevin say he is able to bend his arm, but cannot take any impact. "Not that it has stopped me from training. I am still doing cardio and vascular training and works out with my right arm taped up to the extent that I have thrown 3000 punches with my left hand during the past two days," he said.

"These things happen for a reason. Trainer Peter Smith and I find ways to work around the injury. It’s been injured for the past two to three weeks, so the expectation is I’ll be in this state for another week or so.

“I am running fit and staying in shape, but obviously without throwing the right hand, my game will be off. I’m just grateful that I’ll still have the opportunity, albeit a few months later.”

Fortunately, Lerena fought early last month when he retained his title with a lopsided points win over Dymtro Kucher from Ukraine at Emperors Palace, so the delay will not be overly damaging, even though he’s a fighter who likes to stay busy.

Lerena's promoter Rodney Berman said: "Kevin is too valuable a commodity to push ahead with the April date and was happy to push for the postponement. “At this level, you can’t take chances. He’s clearly been in a lot of pain. I always advocate my boxers be 100 percent ready, or they don’t fight. I hope he recovers because he has a lot to offer and we have major plans.”