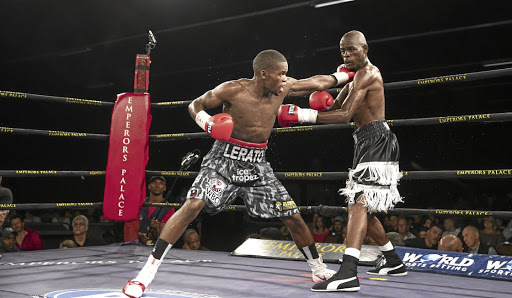 The local boxing public must brace itself for what could become a humdinger of a bout when Lerato "Lights Out" Dlamini and Sydney "The Skeleton" Maluleke collide in a rematch.

The fight will take place at Emperors Palace either in June or September 1, according to promoter Rodney Berman, who staged their enthralling bout last weekend. The two wowed fans with their skills at the Palace, where Dlamini won the closely contested 12-round fight for the then vacant WBC International title by a razor-thin split points decision.

Two judges scored the fight 115-113 and 114-113 in favour of Dlamini, while their colleague voted Maluleke as the winner with 114-113. Maluleke was docked a point by referee Ishmael Koali for holding in the ninth round.

There was an outcry from the general fight public that Maluleke was robbed.

Berman told Sowetan: "Look, I am quite happy to do a rematch. I could do it in June in our boxing extravaganza but my problem is that I have already put the bill together. But I will have a look and see if I cannot fit it in that bill. If it does not work for June, I will do it in our major tournament for September 1."

For the second time in three Commonwealth Games‚ South Africa has failed to win a boxing medal.
Sport
4 years ago

Dlamini's trainer Colin Nathan said: "It was a close fight - probably a draw but the point deduction cost Maluleke. To me I think it will be an easy fight for Dlamini next time."

Bernie Pailman, who trains Maluleke, said: "I am unhappy with the verdict as well as the deduction of a point from my boxer by the referee, who did nothing when Lerato held Sydney. I still feel that despite losing that point in round nine, we won the fight with at least two points. If fair is fair, a rematch will settle all this noise."

WBC representative Peter Ngatane, who supervised the bout, said: "Rodney must write to the WBC and give a compelling recommendation for a rematch."