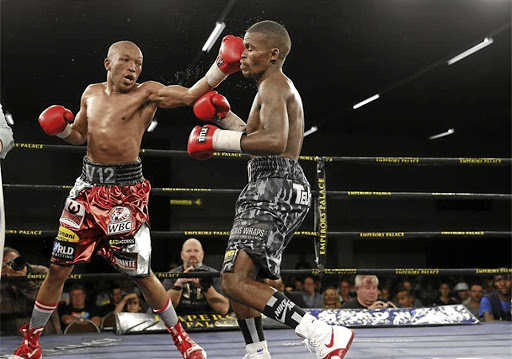 Simpiwe Vetyeka, left, throws a punch at Lerato Dlamini during the semifinal of the Golden Gloves Super 4.
Image: NICK LOURENS

Their fight will form part of the bill that will be staged by Xaba Promotions and Events of BSA 2017 promoter of the year Ayanda Matiti.

Smith was in his corner for the first time when the former WBA International champion with 17 knockouts in 29 wins was defeated by 10-fight novice Lerato "Lights Out" Dlamini in the semifinal of Golden Gloves Featherweight Super Four in October.

Said Smith: "I've got nothing but lots of love for Vetyeka. But this is how the sport of boxing is; there is nothing personal.

Relief as stable-mates contest is called off

""We had been together for only five months before we fought Lerato. All what we did for that fight was to pull weight.

"We did not have enough time to prepare for the actual fight.

"But you know what, Vetyeka wants money and that is why he accepted the offer to fight Thompson."

"I don't think Vetyeka has got strength to cause a real threat at lightweights. I thought he will move to the junior lightweights.

"Thompson's confidence is growing and he is getting the best sparring. He looks very strong and is confident of defeating Vetyeka."

Mokwana, from Limpopo, last fought in October last year, when he retained the SA lightweight title with a majority points decision against Prince Dlomo.

Mokwana, who made his debut under Smith, has won 23 of his 36 fights.