Relief as stable-mates contest is called off 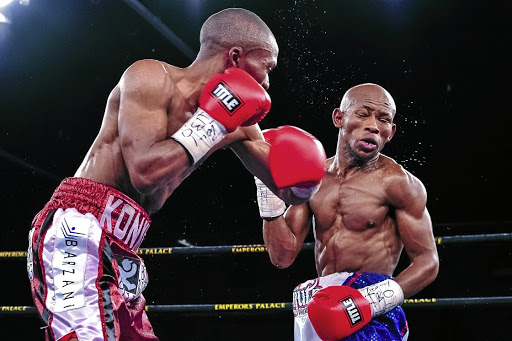 The fight between Simphewe Konkco, left, and Deejay 'Bamuza' Kriel, not in picture, has been called off as the two are friends and stable-mates - both trained by Colin Nathan.
Image: ALEX VAN DER WESTHUIZEN

The two stable-mates' promoter, Rodney Berman, announced last week that the winner between Kriel and Xolisa Magusha for Kriel's WBC International title last weekend will face Konkco in June. But Berman has now called it off.

Nathan said he was going to be conflicted.

"There is genuine respect, love and friendship between the two boxers. They are so close to each other that they sit and have lunch together."

Boxing star and WBF, IBF Intercontinental and WBA International bantamaweight champion Mzuvukile "Old Bones" Magwaca will be operated on his leg on ...
Sport
4 years ago

Konkco, from Mthatha, said: "I am happy that this fight is off because we are stable- mates, very close and we help each other."

Konkco last fought in June when he retained his belt on points against Lito Dante of the Philippines.

The jocular Kriel from Malvern in Johannesburg said: "Simpiwe is my brother and is one of the people who helped me get where I am today, so I am relieved this fight is no longer happening."

"As much as we all need money to pay our bills, to me this is not a business transaction. This is about emotions, sensitivity and loyalty to both of my fighters," he reasoned.

That fight, staged by promoter Branco Milenkovic, happened because it was
mandated by the IBF.