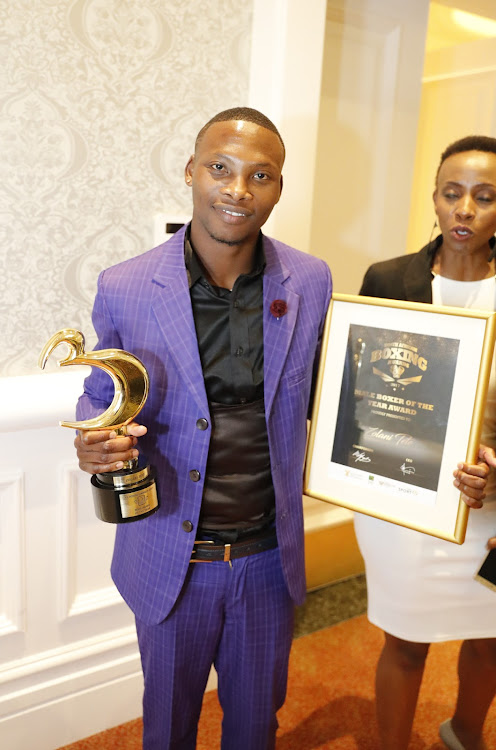 Zolani “Last Born” Tete deservedly walked away with the most sought-after Boxing South Africa 2017 Boxer of the Year award at the Boardwalk Casino in Port Elizabeth on Friday night.

As if Tete’s recognition for his big achievement – taking the interim WBO bantamweight title when he befuddled Filipino Arthur Villanueva of the Philippines in the UK in April last year – were not enough‚ the 29-year-old smart left-hander from Mdantsane also took home the Special Achievement Award.

The award recognised Tete winning the WBO title – which is one of the top four‚ the other being the WBC‚ WBA and IBF – but even more having won it outside South Africa.

Tete‚ the former undefeated IBF junior bantamweight holder‚ was later handed the actual WBO belt for his win against Villanueva.

The belt was achieved after Marlon Tapales had defeated Shohei Omori for the same title‚ but Tapales‚ also from the Philippines‚ failed to make the weight during the weigh-in and forfeited the title.

Tapales’s fight against Omori went ahead and the ruling was that if he won‚ the title would remain vacant‚ but if Omori won he would be crowned.

After Tapales’s victory the WBO championship committee took a decision to upgrade Tete’s status as the WBO holder‚ while the South African was on his flight back home.

Tete followed up with a first round‚ 11 seconds knockout win against Siboniso “Tiger” Gonya in Belfast. His knockout broke all the records in the world of boxing as the quickest world title defence.

But Tete’s history-making knockout did not win him the award because it happened outside Boxing SA’s 2017 period under review‚ which was October 1‚ 2016 to October 31‚ 2017.

“I want to dedicate these awards to my parents‚ my brother Makazole‚ my manager and my trainers‚” the boxer said.

“At some stage I wanted to quit this sport but my manager‚ Mlandeli Tengimfene‚ and Ayanda Matiti said I should not because (they said) there is talent in me‚ and I went on to win three world titles. I thank them from the bottom of my heart.”

Other nominees were Mapule “Thunder” Ngubane and Noni “She Bee Stinging” Tenge.

Most Promising Promoter of the Year: Shereen Hunter of Combat Sport and Events

Promoter of the Year: Ayanda Matiti of Xaba Promotions and Events

Trainer of the Year: Colin Nathan

Manager of the Year: Mlandeli Tengimfene of the All Winners Boxing Club

Matchmaker of the Year: Luyanda Kana

Media Award of the Year: James Gradidge of n-Squared

Zolani "Last Born" Tete says he is hugely disappointed to have to postpone the second defence of his WBO bantamweight belt against Mexican Omar ...
Sport
4 years ago

Zolani Tete‚ Azinga Fuzile‚ Thulani Mbenge and Kevin Lerena have been nominated for the Boxer of the Year category in the Boxing South Africa Awards ...
Sport
4 years ago

The tantalising boxing match-up between Mdantsane homeboys Makazole "Professor" Tete and Lwandile "The Angel" Sityatha, which failed to materialise ...
Sport
4 years ago