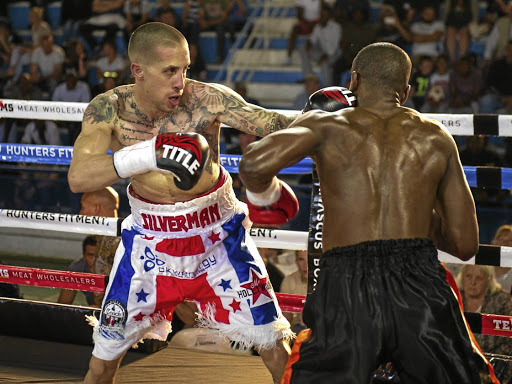 Jared Silverman pounds Zenzele Ntanzi in what turned out to be Mr Hollywood's last bout before he was jailed. / n-squared

Top welterweight boxer Jared "Mr Hollywood" Silverman has been sentenced to five years for the attempted murder of three people, his trainer Gert Strydom has confirmed.

The promising boxer is serving his term at Krugersdorp Prison, on the West Rand, for the incident in 2014.

"I was informed that he has appealed but I am not too sure what has happened because I was told that he went to court yesterday [Tuesday]," said Strydom yesterday.

Silverman, 25, was sentenced this week for the shooting at a music festival in Alberton four years ago, having been found guilty of the crime by the South Gauteng High Court on July 20 last year.

It was reported at the time of the shooting that Silverman got involved in an altercation and opened fire, injuring three bystanders.

It was also reported that a police reservist, who was part of the security team at the festival, shot and wounded Silverman before confiscating the boxer's gun.

Silverman was left in a critical condition and had to undergo surgery. He spent 14 months in hospital.

The boxer, who was trained by Nick Durandt, made a comeback to the ring in April last year. In his last fight, on September 3, Silverman stopped Zenzele Ntanzi in two rounds.

"I bring blood and guts. I will take Thulani to the deep waters and make him drown. I want to see if he has got the heart," the audacious fighter said in September.

There was so much interest in the match-up. Boxing authorities had, however, already suspended him.

Silverman made his professional debut in 2010. He has five knockouts in 10 win, against four losses.