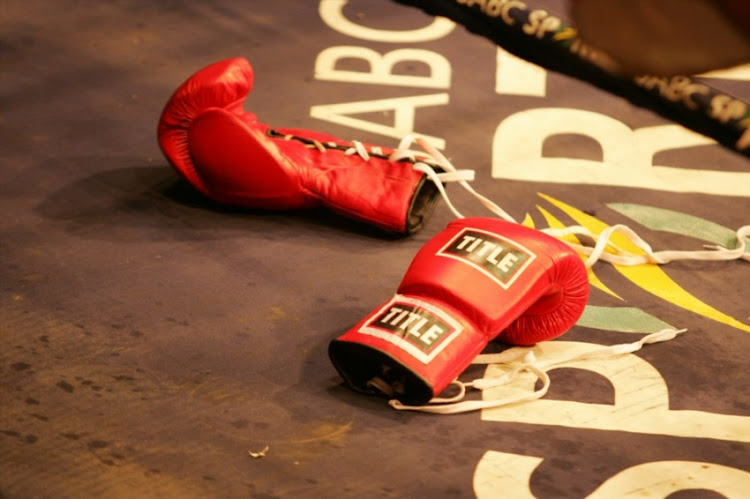 Gloves lays on the ring floor during the Lightweight bout between Patrick Malinga and Maxwell Phofana at Nasrec in Johannesburg.
Image: Lefty Shivambu / Gallo Images

With the entertainment industry awash with unexpected deaths‚ the boxing fraternity has also entered this ignominious occurrence after the passing of once revered boxing prospect‚ Ella Mfene‚ in the early hours of Thursday morning.

Mfene‚ 45‚ died after a short illness in Mdantsane’s Cecilia Makiwane Hospital where he was rushed to after experiencing breathing problems.

Family spokesman and good friend Bongani Zulu said he was shocked when he was called by the hospital to inform him of the deteriorating condition of Mfene shortly after dropping him there.

“When I returned to hospital he was on life support and a few hours later he died‚ ” he said.

Mfene was one of the brightest prospects together with Masibulele “Hawk” Makepula to emerge from the famed Eyethu Boxing Club of now ailing promoter Mzi Mnguni.

He was seen as one of the successors of Mnguni’s world champions Welcome Ncita and Vuyani Bungu.

This when he reeled a six fights unbeaten streak to set tongues wagging in boxing circles.

However‚ he was upset by huge underdog‚ Mfusi Maqolo‚ in 1991 with a knockout defeat that ultimately had him in hospital where he spent a considerable amount of time in a coma.

When he finally regained consciousness he immediately stopped boxing and focused on other facets of the sport‚ including offering technical expertise to his former stablemates.

Bungu recalls Mfene as a very good youngster who was destined for stardom.

“We were confident that he would take over the baton from us‚” Bungu said.

Mnguni was equally devastated on the news of Mfene’ death‚ describing it as one of the darkest moment of his boxing life.

No date for his funeral has been announced as yet.