Thunder in line for two belts 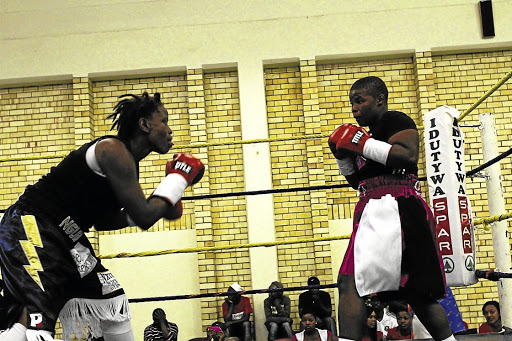 Mapule Ngubane , left, with Rita 'Shot Gun' Mrwebi during a fight in Butterworth, Eastern Cape. Ngubane will take on Slovenian Ema 'The Princess' Kozin in Oklahoma City in the US in March. / SINO MAJANGAZA

The 29-year-old boxer will achieve this feat if she dethrones Wiba middleweight champion Ema "The Princess" Kozin of Slovenia in their fight in Oklahoma City, US, on March 30.

The winner will also take home the vacant GBC belt.

Kozin, 19, is undefeated in 12 fights. She has seven stoppages. If big-fight temperament is anything to go by, then Ngubane - nominated for Boxing SA's 2017 female boxer of the year award - should be too experienced for the champion.

She has completed five 10-round championship bouts. Kozin went the full 10-rounds distance only twice.

She failed to wrest the WBF junior middleweight belt from defending champion Noni "She Bee Stingin'" Tenge in Kagiso in September last year - nominated for the 2017 Boxing SA female fight of the year.

Ngubane's trainer Sam Ndlovu said they had started preparing for the big fight against Kozin. "We have agreed on purse monies. It is not a great offer but better than what we were offered for the cancelled fight against Inna Sagaydakovskaya for the WBC Silver title in Kazakhstan on December 30."