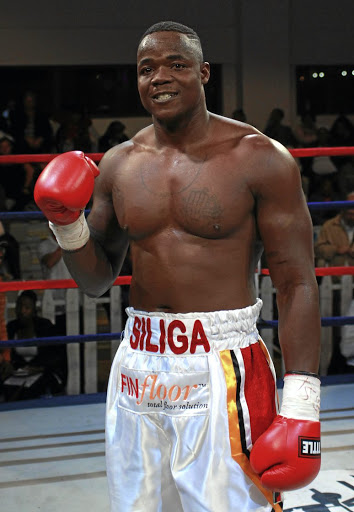 Siliga's confidence took a knock after his loss to Osborne "Big Daddy" Machimana for the vacant SA heavyweight title in October.

Siliga, who is rated No 4 locally, has always been trained by Mick Castellan and Kenny "Mr Jones" Mabunda. He is now pinning his hopes on Toweel to assist in redeeming him and ultimately guiding him to the SA heavyweight title.

The belt eluded him last year when he lost to the vastly experienced yet grossly unfit Machimana, who weighed in at a hefty 138.6kg, in Bloemfontein.

Lack of experience killed the supremely built Siliga, who weighed 102kg. He dropped to six losses against six wins after the bout, his first over 12 rounds.

"I have teamed up with Toweel and I believe that within a short space of time I will be the new SA heavyweight champion," Siliga announced yesterday.

"Alan has a very good cruiserweight [Akani Phuzi] who will give me quality sparring," he added.

"I am looking forward to working with this young heavyweight who I believe can bring back excitement in that weight class," said Toweel, who is known to have done a sterling job with young and unknown fighters, a feat that rightly earned him a nomination for Boxing SA's trainer of 2017 award.

"I want to work with him properly before I start negotiating fights for him; before we challenge Osborne."