Nonina continues to steal the show 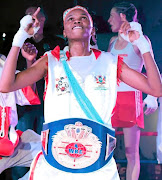 As WBF president Howard Goldberg announced this, he said when the 25-year-old Nonina - from Idutywa in the Eastern Cape - dared to get into the ring against the vastly experienced Graf, not many put their money on her.

"Considering that Nonina [fight record] was just 9-3-1 with her best win coming in a national title fight against a 3-0 challenger, this seemed reasonable assessment," he said.

"After all, Graf had a decade more of ring experience and was a former world champ with a stellar 29-5 record. And Alesia didn't perform badly nor had an off-night that March 31 night in Khayelitsha."

The Cape Town-based Goldberg added: "It was the fact that Nonina rose to the occasion that made this a very memorable fight, outstanding enough to be our fight of the year in 2017.

"Graf was the aggressor, while Nonina put in a masterful display of boxing and in the end it was so close that if one round would have been scored differently, the vacant WBF women's world bantamweight championship would have remained vacant."

Nonina is now based in Giyani, Limpopo, under unheralded trainer Immanuel Mutavhatsindi who also guided his charge to five successful defences of the SA title.

"This is a good achievement for us and it goes to show that we are going somewhere," said Mutavhatsindi who expects his charge to retain her crown as SA boxer of the year next month in Port Elizabeth.