Rofhiwa knocks the form book out of the ring 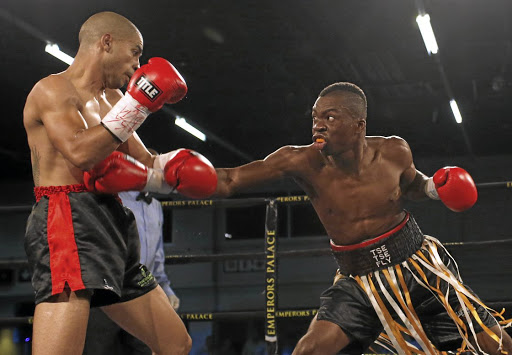 Rofhiwa "Tsetse Fly" Nemushungwa, right, tries to land a jab on Joshua "TKO" Studdard during their 10-rounder which Nemushungwa won on a split points decision on Monday.
Image: CHRISTO SMITH

Nemushungwa, a left-hander from Thohoyandou, bettered his record to 11 wins against four losses and two draws, while Studdard suffered his second loss against eight wins. The 10-rounder, African Ring's Christmas Cracker tournament, was Nemushungwa's first fight at the casino where crowd puller Studdard - from Sophiatown - is a regular, having fought six times there already.

But Studdard, who is trained by Warren Hulley, revealed that he fought from round four with only one hand.

"I could feel pain in my hand after hitting Rofhiwa with a big shot in round three. But I did not want him so see that because otherwise he would have taken advantage and put me under more pressure," said Studdard.

"I was taken to a doctor by my brother around 1am because the pain was unbearable. The doctor could not do anything because my hand is badly swollen. He advised me to come for X-rays on Friday."