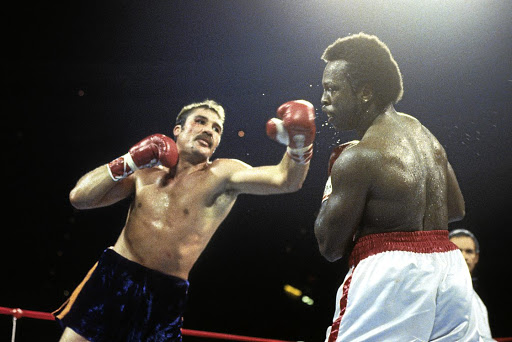 Gerrie Coetzee hooks Michael Dokes during their fight in Ohio, US. Coetzee stunned the Americans to win the WBA World heavyweight title. The SA legend had 21 KOs in 33 wins against six losses and a draw.
Image: THE RING MAGAZINE

Strydom, who guided Coetzee to stardom, said organisers of the Hollywood and African Prestigious Awards who presented Coetzee with the Lifetime Achievement Award in California, US, last week, have already started shooting the movie about the retired boxer's life.

"I am very happy for him to receive the award in America. The organisers will actually be making a movie about his life. That is so great for a humble guy like Gerrie," said Strydom yesterday.

Veteran American ace actor Denzel Washingon will be part of the movie. Strydom said Washington was present at the awards ceremony.

Coetzee, 62, was presented with the award because of his history-making victory for the WBA heavyweight title against American favourite Michael Dokes in Ohio in 1983.

Coetzee knocked Dokes out cold in the 10th round of their world title bout. Coetzee became the first African heavyweight boxer in history to fight for and win a heavyweight title when he beat Dokes. Coetzee later lost the title to American Greg Page in 1984.

Coetzee said: "Gratitude is the sign of noble souls. I took the liberty to say on behalf of my fellow Africans that we are humbled by this prestigious recognition, and indeed privileged to be part of the auspicious occasion. I am mindful of those who set me on the path to becoming a world heavyweight boxing champion and that is Thinus Strydom."

Coetzee's fight against Tate took place at Loftus Versfeld in Pretoria in 1979. It was the first time that black South Africans were allowed in that stadium due to racist apartheid policies.