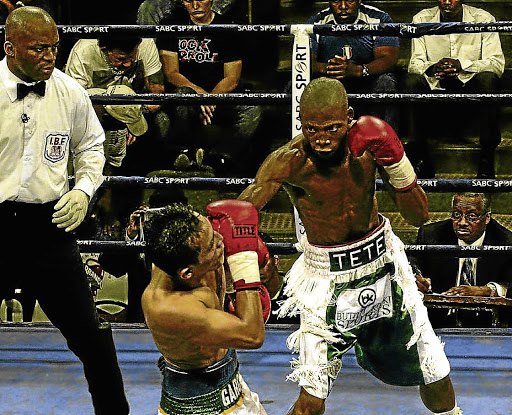 Zolani turns focus on title defence in Ireland on Saturday.

Distinguished boxer Zolani "Last Born" Tete took the loss on the chin and congratulated long jump champion Luvo Manyonga for winning the Sport Star of the Year award at the SA Sport Awards at the weekend.

"We did not make it on Sunday and want to say congratulations to the winner. We just want to unify this division and see who would say we don't deserve the award after that achievement," Tete told Sowetan from Belfast, Northern Ireland, where he will defend his WBO bantamweight belt against fellow South African Siboniso Gonya on Saturday.

Tete - the first boxer to be nominated for the national awards since they were incepted 11 years ago - intends to unify the division by defeating Ryan Burnett, who holds both the IBF and WBA belts.

Burnett, from Belfast, will be at ringside on Saturday.

Saturday night's world title fight between Tete and Gonya is the first between two South Africans on foreign soil.

It will be the main supporting bout to one between local boxer Carl Frampton and Horace Garcia. Tete and Frampton are promoted by the UK's Frank Warren, who will organise the tournament.

Tete's camp arrived in Belfast on Sunday and have already had two sessions.

Tete won the WBO world title while on the flight back home after defeating Arthur Villanueva in the final eliminator for the interim belt in Leicester on April 22.

This after Marlon Tapales was stripped of his world title for failing to make the weight limit for his defence against Shohei Omori the following day. The fight went ahead on condition that if Tapales beat Omori - who was within the weight limit - the title would remain vacant. But if Omori won, he would be crowned.

Tapales stopped Omori in the 10th round but the WBO decided to upgrade Tete from interim champion to world champ.