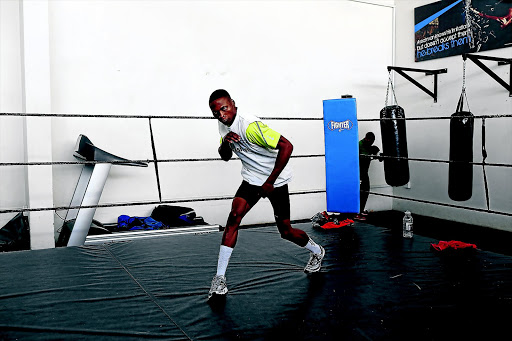 Zolani Tete has been praised as a dedicated, hard-working boxer . / ALON SKUY

Ngatane was asked if Africa will ever produce a world beater like Ghanaian Azumah "The Professor" Nelson - a former WBC featherweight and junior lightweight holder - who is widely considered the greatest African boxer of all time.

"Boxers of yesteryear like Azumah did not go to gyms only after having signed fight contracts. They lived in their gyms. If skill failed them during fights, they would shift to the highest gear because they were super-fit," said Ngatane yesterday.

"Look at Zolani Tete's chiselled body. You can see that he is a gym worm. He brings all during a fight and there is no way he cannot succeed. His achievements are a result of commitment, dedication and hard work. So there is talent in Africa, especially SA, but the problem is that boxers of today lack commitment.

"Look at Malcolm Klassen and think of his performance when he beat Cassius Baloyi in 2009. He looked destined for greater heights but he went off the rails. Also take an example of Thabo Sonjica, a talented boxer who lost his world title on the scales because he failed to make the weight. How do you explain that?" he asked.

Tete is rated No 5 by WBC in the junior bantamweights, 14th by the WBA in the same weight and No 8 by the IBF in the bantamweights.