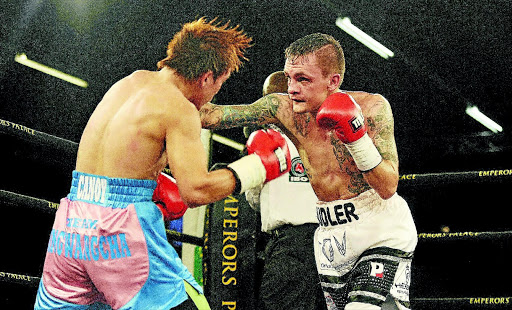 Canoy, a novice of 13 wins from 16 bouts, ran out of steam and retired going into the eighth round.

The boxer from the Philippines - whose name does not even appear in the top 100 of the IBO ratings - had somehow given a good account of himself against the vastly experienced former IBO, WBA and WBA Super mini flyweight and the IBO junior flyweight holder.

Budler, who registered his 10th stoppage in 31 wins against two losses, was involved in his 15th championship bout, while Canoy fought his first 12-rounder away from home where he has fought all his 15 bouts.

Budler's longevity, big fight experience and ring generalship did not really matter on the night.

He was unable to find his range until the seventh round where he dropped Canoy for a count.

Only pride saw Canoy get up, the writing was clear on the wall that he had lost the battle.

He did not have even a puncher's chance to upset the bookies. Canoy has six stoppages.

Budler - rated No 5 by the WBC and fourth by the WBA - had not stopped a fighter in nearly two years.

He wants to get back to the top in a weight division which boasts Ganigan Lopez (WBC champ), WBA holder Ryoichi Taguchi, IBF champion Akira Yaegashi and WBO holder Kosei Tanaka.

The Namibian - who failed to make the weight limit for the cruiserweight clash - sheepishly turned his back in the fifth round against Kevin "Ko" Lerena.

The fight of the night belonged to the light heavyweight 10-rounder between Ryno "Lion" Liebenberg and German Enrico Koelling.

They fought a clean fight throughout, giving diners at Golden Gloves' box and dine "Thunder and Lightning" bill value for their money.

Earlier, referee Simon Mokadi surprised all and sundry when he startlingly stopped the fight between Ntuthuko Memela and Thulani "Tulz" Mbenge in the third round.

Mbenge added his ninth stoppage. Rowan Campbell knocked out Fhulufhelo in the first round.