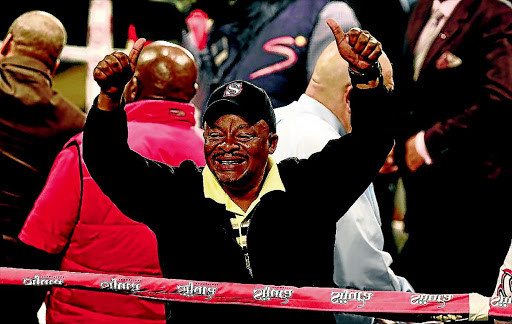 "The tournament in question has not been sanctioned by BSA," he said after Sowetan expressed doubts about the tournament.

This after boxers, trainers, managers and even some promoters had demanded to know if boxers who were set to participate would be paid, since Andile Sidinile still owed purses to three boxers who fought in his event in April.

"On that matter, I can also confirm that BSA has issued a final notice to promoters who have failed to pay their outstanding levies," said Lejaka.

"As it is practice in revenue collection, the outstanding levies have been categorised according to their life span and magnitude [how much you are owing and how long have you owed].

"Based on that approach, there are promoters that we have already indicated won't be allowed to host any future tournaments owing to the magnitude of their outstanding levies."

Sidinile - a former BSA board member and secretary of the Eastern Cape Boxing Promoters Association - said: "We know that we cannot have another tournament until we settle our obligation to BSA. So we are going to do just that and continue with our tournament."

Mzuvukile Magwaca and Daniel Noriega from Mexico were to headline Sidinile's tournament in a contest for the WBA Pan African bantam- weight belt. Leighandre Jegels and Tanzanian Lulu Kayenga were pencilled in to fight for a vacant WBA Pan African flyweight title.

Kayenga is the same boxer whose bout against Nozwelethu Mathonsi in East London in September last year was called off after BSA's East London manager Phakamile Jacob discovered that she submitted a hand-written pregnancy test to hide her pregnancy. Later tests confirmed that she was pregnant.