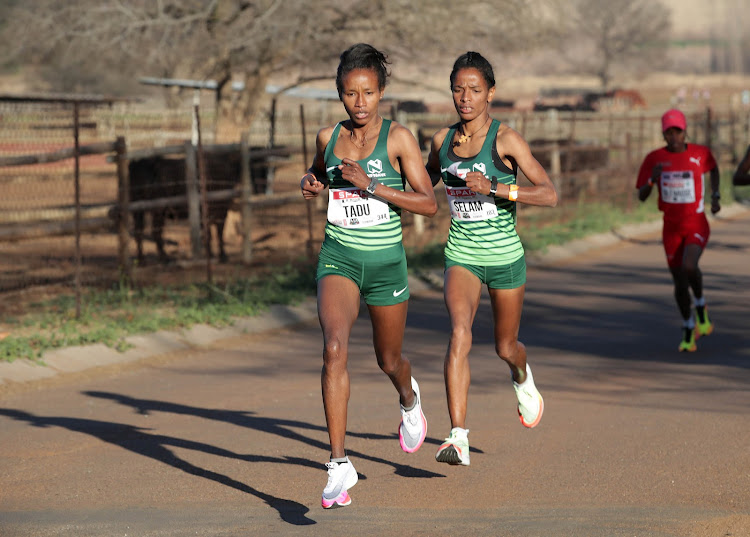 Ethiopian runner Tadu Nare stormed to another impressive win during the Tshwane leg of the 10km Tshwane Spar Grand Prix in Irene on Saturday in a time of 32:44 minutes.

On a chilly highveld morning, the defending champion was followed by her compatriot Selam Gebre in a time of 33:08 with three-time Grand Prix winner Irvette van Zyl third in 34:14.

The 2018 Grand Prix winner Glenrose Xaba finished fourth a in 34:28 and she was followed by another former overall winner in Kesa Molotsane with a time of 34:52.

“It was a tough race, especially because of the weather,” said Nare after the race.

“It was very cold and I was feeling numb, and I had difficulty breathing because of the cold air. I was hoping to finish in 31 minutes, so I really pushed it over the last two kilometres.”

Gebre was delighted to have finished second.

“She (Nare) has been a mentor to me since I started the Spar races,” said Gebre.

Van Zyl, who was the first South African to take a podium spot this year, said the route suited her perfectly.

“I like hills and it also suited me that we started slowly. I have been struggling with a foot injury and a couple of bouts of flu, so I ran according to my fitness level.

“Because I didn’t push too hard at the start, I still had some gas in the tank at the end of the race, and I was able to overtake Glenrose. I hadn’t expected to come third, so I am really happy,” said Van Zyl.

Xaba said she had wanted to challenge the Ethiopian runners and kept up with them for the first five kilometres.

“But after that I couldn’t stay with them any longer. When Irvette passed me, I couldn’t respond because of the lactic acid in my legs,” said Xaba.

“But I will continue to challenge the Ethiopians until I can keep up with them all the way. The East Africans are an inspiration to us South Africans.”

Xaba missed the first two races because she was trying to qualify for the World Championships, but said she would run the remaining two races in Johannesburg and Cape Town.

A notable absentee from the race was Namibian Helalia Johannes who won the first race in Gqeberha and finished second in Durban and Mbombela.

Johannes won a bronze medal at the Commonwealth Games marathon a week ago but was unable to change her flights to enable her to reach SA in time to take part in the Tshwane race.

With suggestions from pundits that international runners should not be allowed to run the Spar Grand Prix 10km series, SA runner Diana-Lebo Phalula ...
Sport
4 weeks ago

It was another dominant performance by Ethiopian athlete Tadu Nare, who won the third leg of the Spar Grand Prix series in Mbombela in time of 32.43 ...
Sport
1 month ago

It was a case of swapping positions in the second Spar 10km women’s Grand Prix in Durban yesterday, with Ethiopian Tadu Nare taking the first ...
Sport
1 month ago
Next Article