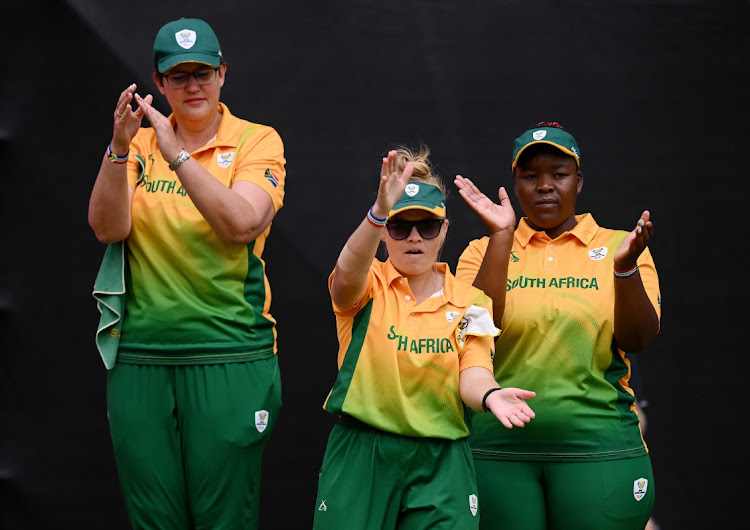 Had this been a boxing bout, both fighters would have hit the deck. Unfortunately it was the SA women’s four who were ultimately knocked out, settling for silver after losing their final against India 10-17 in Birmingham on Tuesday.

Thabelo Muvhango, Bridget Calitz, Esme Kruger and Johanna Snyman had trailed 2-8 after seven ends, but then battled back to lead 10-8 with five ends remaining.

But the Indian quartet pulled level and then edged into a 12-10 lead before some SA errors, forced by the need to take risks, cost them dearly in the final two ends.

Kruger and Snyman were in the four that took silver behind Australia at Gold Coast 2018, while three of the Indians, including Lovely Choubey, were part of their four eliminated in the quarterfinals four years ago.

The track and field competition opened on Tuesday morning with defending 100m champion Akani Simbine cruising through his heat, easily winning in 10.10sec to book his spot in Wednesday’s semifinals.

Tatjana Schoenmaker laid down a world-class marker as she clocked the fastest time in the 200m breaststroke heats at the Commonwealth Games on Sunday ...
Sport
1 week ago

His main rivals also strode through. Kenya’s Ferdinand Omanyala, who relieved Simbine of his African crown in Mauritius in May, went through in the fastest time, clocking 10.07 to edge Emmanuel Eseme of Cameroon.

Yupun Abeykoon of Sri Lanka was the quickest in 10.06, but Ghana’s Benjamin Azamati looked to have plenty in reserve as he won his race in 10.19.

The final will be staged later on Wednesday night.

The big casualty of the morning was the elimination of Prudence Sekgodiso in the women’s 800m heats.

She finished third behind Kenyan’s Mary Moraa, a bronze medallist at the recent world championships, Halimah Nakaayi of Uganda, the 2019 world champion.

Sekgodiso had needed to finish in the top two to earn automatic passage into Saturday’s final.

She had tried to overtake them going into the back straight, but they simply out-hustled her and that seemed to douse her fire.

Sekgodiso crossed the line behind them in 2min 00.17sec, the fastest time of the athletes who didn’t qualify — the two fastest losers were England’s Alexandra Bell (1:59.76) and Lindsey Butterworth of Canada (2:00.04).

Jovan van Vuuren qualified for the final of the long jump, with his 7.87m effort ranking him third of the 12 contenders, although he can expect tough competition from the likes of Australia’s Henry Frayne and Shawn-D Thompson of Jamaica.

The SA cricket team suffered their second defeat, going down to hosts England by 26 runs. Chasing 168 for victory, the Proteas never really got going and were 141/4 after 20 overs. Laura Wolvaardt top-scored with 41.