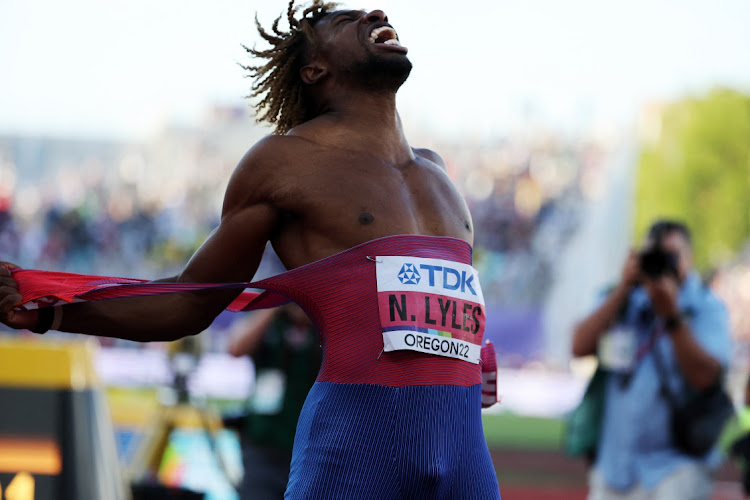 Noah Lyles of the US celebrates after winning the men's 200m final.
Image: REUTERS/Lucy Nicholson

At least running in lane one gave Adams one of the best views of the third-fastest 200m race in history, and he would do well to remember that his Eastern Cape home boy, Anaso Jobodwana, finished eighth in the 200m at the 2012 London Olympics before improving to take the world championship bronze in 2015.

Lyles, the defending champion who finished only third at the Tokyo Olympics, edged past the 19.32 US mark that Michael Johnson had set at the Atlanta Olympics in 1996, a year before Lyles was born. Only the Jamaican duo of Usain Bolt (19.19) and Yohan Bolt (19.26) have been quicker than that.

Three years ago in Doha Lyles won the world title in 19.83.

In 2018 Lyles and Pretoria-based Clarence Munyai both clocked 19.69 personal bests, but by the end of the following year the American had forged a 0.54sec lead and this year has stretched that to just more than a full second. 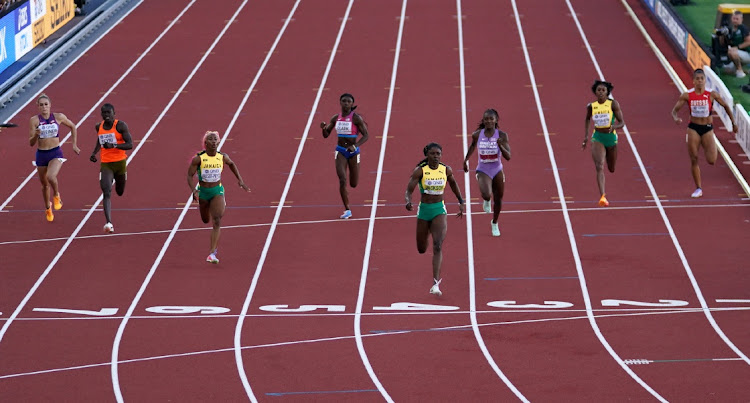 The men ran only minutes after Jamaican Shericka Jackson had taken the women’s 200m crown in a 21.45 championship record that ranks her the second-fastest of all time, behind the 21.34 world record held by Florence Griffith-Joyner of the US.

Lyles’s performance should hearten Van Niekerk, who has been training alongside him under coach Lance Brauman in Florida.

The 400m world record-holder, who has spent five years coming back from a bad knee injury, has positioned himself as one of SA’s best chances of a medal at this meet, although he will have a tough time in the 400m final on Friday (Saturday morning SA time).

The SA men’s 4x100m relay team, set to compete in the heats on Friday, is also a podium possibility, although the Americans will start as overwhelming favourites after their domination of the individual 100m and 200m races.

Luxolo Adams edged into the 200m final as a fastest loser at the world championships in Eugene, Oregon on Wednesday morning SA time), but he needed ...
Sport
4 weeks ago

SA middle-distance prospect Prudence Sekgodiso never got to run her own race, but she still advanced to the semifinals of the women’s 800m after finishing fourth in her race, the slowest of the six heats.

American Raevyn Rogers, a medallist at the Tokyo Olympics and the last championships in Doha in 2019, won in 2min 01.36sec, with the other two automatic qualilfying spots going to Ethiopia’s Habitam Alemu (2:01.37) and Noelie Yarigo of Benin (2:01.58).

Sekgodiso, who beat Yarigo at the African championships in Mauritius in May, crossed the line in 2:01.60, the fifth best time of her career.

The 20-year-old will have to get closer to the 1:58.41 personal best she ran in Nairobi in early May to make the final. Her semifinal field on Friday will include American Olympic champion Athing Mu, Kenya’s Naomi Korir who finished one spot ahead of her in Mauritius, Britain’s Olympic finalist Alexandra Bell and 2018 world under-20 champion Diribe Welteji of Ethiopia.

Only the first two of the three semifinals will qualify automatically, with just two fastest losers overall joining them in Sunday’s final.

Adriaan Wildschutt tried to stick to the front in his men’s 5,000m heat, but when the front-runners pressed the pace, he slipped backwards and finished 18th in 13:44.32. Not even his 13:28.03 personal best from May would have qualified him for the final.

Johan Grobler was unable to advance beyond the qualifying round of the men’s javelin.

Wayde van Niekerk qualified for his first major final in five years as he finished second in his 400m semifinal heat at the world championships in ...
Sport
4 weeks ago

Wayde and Caster are still in the fight five years on

Wayde van Niekerk and Caster Semenya are set to be in action in Eugene, Oregon, on Wednesday (Thursday morning SA time), five years after they last ...
Sport
4 weeks ago

Wayde van Niekerk cruised to victory in the 400m heats at the World Championships on Sunday, and his pre-race swagger and performance on the track ...
Sport
1 month ago
Next Article