US superstar eyes Wimbledon after a year out 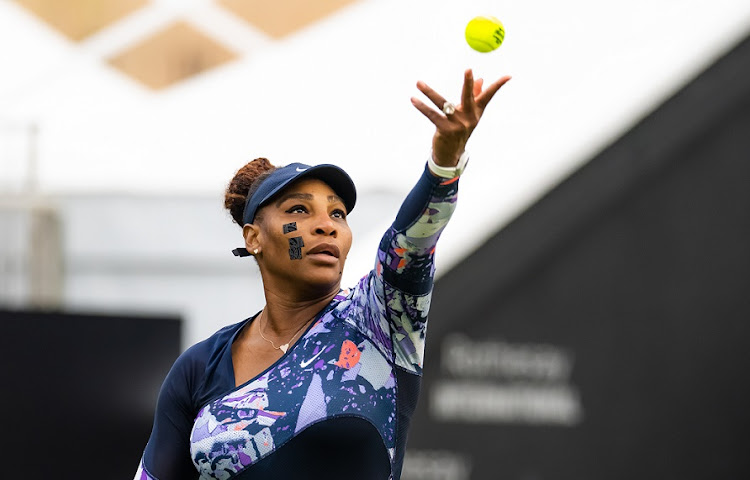 Serena Williams of the US in action while playing doubles with Ons Jabeur of Tunisia against Marie Bouzkova of the Czech Republic and Sara Sorribes Tormo of Spain in the first round of doubles of the Rothesay International at Devonshire Park in Eastbourne, England on June 21 2022.
Image: Robert Prange/Getty Images

Serena Williams made a winning return to action at the Eastbourne International on Tuesday as she and partner Ons Jabeur came from a set down to beat Sara Sorribes Tormo and Marie Bouzkova 2-6 6-3 (13-11) in the women's doubles.

The former world number one had not played competitive tennis since limping out of last year's first-round match at Wimbledon — where she has won seven of her 23 Grand Slam singles titles — in tears due to a leg injury.

Back on court and on the grass again, Williams stepped up preparations for Wimbledon, where the main draw starts next Monday, having been granted a wild card to enter, alongside Tunisian Jabeur in the opening round at Eastbourne. Looking rusty with some loose early shots, 40-year-old Williams, who has slipped to 1204th in the singles rankings, saw her serve broken in the fourth game and there was no way back as Spaniard Sorribes Tormo and her Czech partner took the opening set.

Williams, who was sporting black tape on her face to help with a sinus problem, had no answer as Sorribes and Bouzkova made three successive breaks at the start of the second to help put them in a commanding position. However, a ferocious volley from Williams helped her and Jabeur hold serve to make it 4-3, before the American showed further signs she was starting to find her rhythm with a booming forehand down the line to break their opponents' serve.

Williams served out the next game to take the match to a final set tiebreak, which swung this way and that, with both pairings having match points before Sorribes Tormo missed a volley at the net to gift her opponents victory.

“It was so fun to play with Ons,” Williams said. “We had fun.

“I caught some fire behind me. I needed that. It was good. We're just taking it one day at a time.”

Serena gets Wimbledon wild card, to return to Tour at Eastbourne

Serena Williams will resume her quest for an elusive 24th Grand Slam singles title at this month's Wimbledon after making her long-awaited return to ...
Sport
1 week ago

Big-dreaming Gauff feels no pressure ahead of maiden semifinal

Teenager Coco Gauff will not be swept up by the emotion of reaching her first ever Grand Slam semifinal at the French Open on Tuesday, with the ...
Sport
3 weeks ago

After missing out in four Grand Slam finals, SA’s wheelchair tennis star, Kgothatso “KG” Montjane, is confident of breaking her duck in next month’s ...
Sport
4 days ago

Rafael Nadal would probably not have played any Grand Slam other than the French Open with the chronic foot injury that needed numbing injections in ...
Sport
2 weeks ago
Next Article