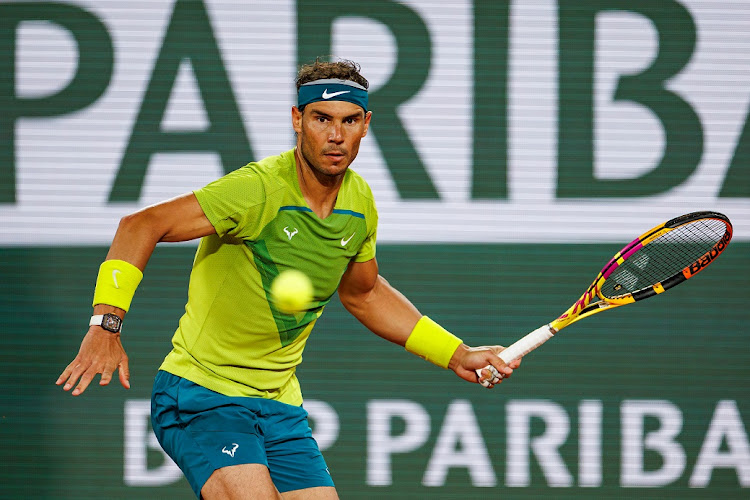 Rafael Nadal of Spain hits a forehand against Corentin Moutet of France in the second round of the French Open at Roland Garros in Paris on May 25, 2022.
Image: TPN/Getty Images

Nadal counts 13 Roland Garros titles among his overall 21 majors — the highest among men — and despite his injury-blighted build-up to the clay court tournament he has looked at his usual best in the first two rounds. The Spaniard, whose preparations were hampered by a rib injury and a foot problem, was not keen to talk about his physical condition.

“I can't try to go very deep in a tournament if I'm worried about my physical issues every single day,” he said.

“So if something happens, I am going to accept it. But for the moment I am focused on the tennis.”

The Spaniard, who turns 36 next week, will next meet Dutch 26th seed Botic van de Zandschulp with a potential quarterfinal looming against world number one Novak Djokovic, who defeated him in last year's semifinals.

Playing under the lights at Court Philippe Chatrier, Nadal peppered the red clay with winners from both his forehand and backhand in the first two sets to leave Moutet stranded. In his first career meeting with the 23-year-old French wild card, Nadal broke Moutet's serve four times in the first two sets but uncharacteristic errors at the start of the third allowed his opponent to take a 2-0 lead.

Nadal immediately broke back, however, to get the set back on serve and after another exchange of breaks, the Spaniard broke Moutet again to seal victory on his first match point.

Rafael Nadal has moved to ease concerns about his injury problems ahead of the French Open, posting a picture of himself training in full flow at his ...
Sport
3 months ago

Sixth seed Carlos Alcaraz clawed back from the brink of a shock second-round defeat to outlast fellow Spaniard Albert Ramos-Vinolas in a five-set marathon that fully tested his title credentials.

Alcaraz is now unbeaten for 12 straight matches after bagging back-to-back titles in Barcelona and Madrid going into Roland Garros.

Barbora Krejcikova's French Open campaign came to a premature end after the reigning singles and doubles champion said she had to withdraw from the Grand Slam after a positive test for Covid-19 on Wednesday.

Krejcikova, who returned to action at Roland Garros from an elbow injury that had sidelined her since February, was knocked out in the first round of the singles in which she was the second seed, losing to Frenchwoman Diane Parry in three sets.

Czech Krejcikova had been due to start her doubles campaign along with compatriot Katerina Siniakova.

Another Czech player, Marie Bouzkova, was also forced to withdraw from Roland Garros after testing positive for the virus. Bouzkova had been due to face Elise Mertens in the second round and she did not play her first-round doubles match either.