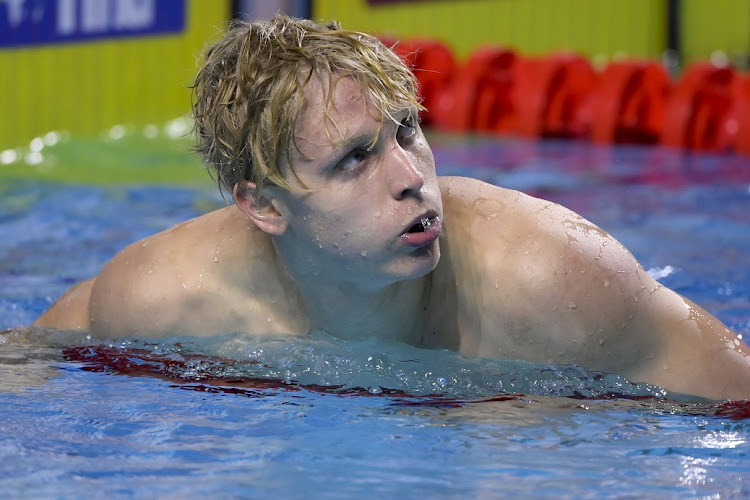 Matthew Sates secured two gold medals on a prolific opening day for the SA swimming squad at the first leg of the Mare Nostrum series in Monaco on Saturday night.

The rising teenage star was the first of the South Africans in action in the evening finals, powering to victory in the 400m freestyle. Sates held off Switzerland’s Antonio Djakovic to take the title in 3:49.27.

Not long after that the Pietermaritzburg swimmer was back in the pool for the 200m individual medley, taking the lead after the first 50m but then dropping back to third spot in his least favourite backstroke leg. Sates then stormed back to the front of the pack on the final freestyle leg to win in 1:57.43 with American Sam Stuart second in 1:58.31.

After leading for much of the 100m breaststroke, Lara van Niekerk was just out-touched by Olympic champion Lydia Jacoby. The 19-year-old, who beat compatriot and Olympic silver medallist Tatjana Schoenmaker at the recent SA national championships in Gqeberha, finished in 1:06.60 with Jacoby taking the win in 1:06.55.

“It was just nice racing against the best in the world,” Van Niekerk said.

Newly crowned NCAA champion Matthew Sates is quitting university in the US to return home to Pietermaritzburg to focus on his swimming career as a ...
Sport
3 months ago

“I didn’t really see anyone next to me, but I knew she was going to come back hard on the second 50. I saw her at the end, I actually thought I had it but she just out-touched me. She was super-sweet about it, she congratulated me and she’s an amazing person.”

On competing at senior international level for the first time, Van Niekerk said: “I’ve definitely learnt how to manage with my nerves — how to control it and not let big names that have achieved a lot intimidate me or anything. And I’ve just learnt to enjoy every moment because this is all part of the learning process.”

Van Niekerk was back in the pool in the skins races later in the evening, winning her 50m breaststroke quarterfinal in 30.08 to progress to Sunday’s semifinal. Jacoby was fourth in that race in 31.43 seconds.

Veteran Chad le Clos was in action in the 200m butterfly final. He led at both the 50 and 100m marks but dropped back in the third 50m to eventually finish behind Switzerland’s Noe Ponti who won in 1:56.51. SA’s four-time Olympic medallist did well to hold off Brazilian Leonardo de Deus to finish second in 1:56.74.

The other two South Africans to grace the podium in Monaco were teenagers Pieter Coetzé and Rebecca Meder.

Coetzé finished third in the 100m backstroke in 54.00 seconds. Frenchman Yohann Ndoye-Brouard was first in 53.63 with American Michael Andrew second in 53.97.

Coetzé was also back in the pool for the 50m skins. The 18-year-old won his backstroke quarterfinal in 25.22 seconds to book a spot in Sunday’s semifinal.