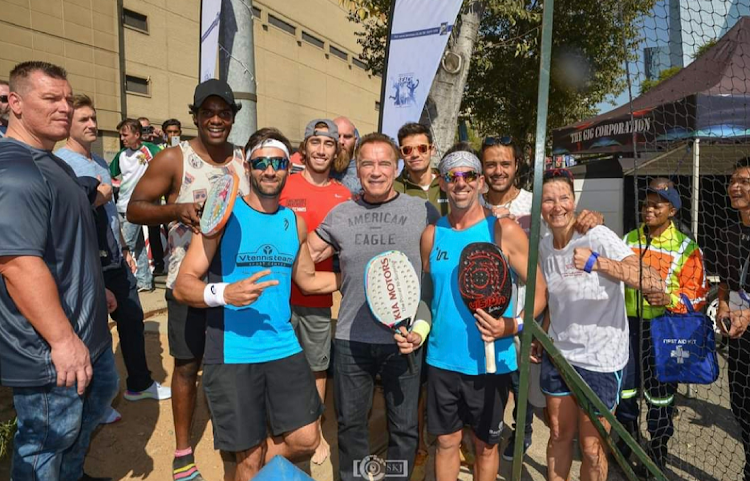 Arnold Schwarzenegger surrounded by enthusiastic athletes during the 2019 Arnold Classic Sport Festival Africa in Johannesburg. The multi-sports event is set to make a return after a two-year absence.
Image: SUPPLIED

Organisers of the Arnold Classic Multi Sport and Art Festival Africa say security will be tight at this year’s event after the founder and movie star Arnold Schwarzenegger was kicked during his last visit to the country.

The Arnold Classic Africa makes its comeback to Johannesburg after a two-year absence due to Covid-19. The three-day event will run from June 3 to June 5.

The classic has emerged from a series of events launched 30 years ago by Schwarzenegger around the world to promote a healthy lifestyle through sport and nutrition.

Arnold Classic organiser Wayne Price said they are waiting for confirmation if Schwarzenegger will attend the event at the Gentle Giant Tent City in Ruimsig.

“According to all our plans he will be here to support the event, but we are still waiting for confirmation,” Price said.

In the previous edition of the event, Schwarzenegger was kicked by an unknown man while interacting with participants.

The culprit was whisked away by police, but the Hollywood superstar and former governor of California opted against pressing charges.

“We took note of what happened there and how it happened. And I must say that because now we have moved to an open field we have gone the extra mile with regards to our security,” Price said.

“We’ve also been blessed because working with the City of Joburg as our partners we have been able to engage and follow the protocols with the JMPD, SAPS and others.

“So we are making sure that through the right conversations with the right stakeholders we will be able to secure the platform and make sure that everybody will be safe.”

An unknown man assaulted actor Arnold Schwarzenegger during a public appearance in SA, but he appeared to quickly recover. Schwarzenegger later posted on Twitter: "I only realized I was kicked when I saw the video like all of you." https://abc7.la/2W9Od7h

The event has been held in Sandton since 2016 and Price said this year’s edition promises to be bigger and better in the new venue.

“Because of the new venue, we are able to do so much more. In 2019 we did close to 85 activations, this year, as wonderful as it is, we got 60 activations which is a huge number of participants.

“We are also able to include fishing because of the natural resources on the terrain and we got marble playing as well.”

Organisers of the classic said: “While bodybuilding and power sports are at the heart of the classic, given Schwarzenegger’s passion and lifetime commitment recognised through titles such as Mr Universe, more than 55 sporting codes will be given a platform during this sporting extravaganza.

Tickets can be bought on the Arnold Classic website.