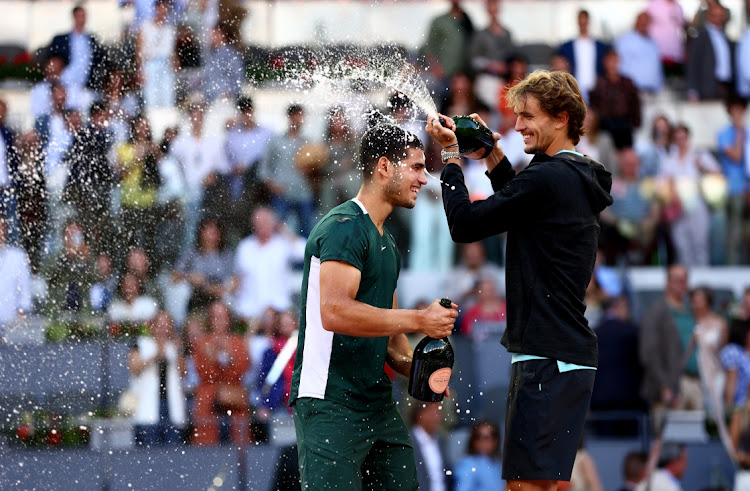 Carlos Alcaraz of Spain celebrates with champagne after his straight sets victory during the Men's Singles final match against Alexander Zverev of Germany during day eleven of Mutua Madrid Open at La Caja Magica on May 08, 2022 in Madrid, Spain.
Image: Clive Brunskill

Alcaraz had knocked out Rafa Nadal and Novak Djokovic in the previous two rounds in matches that totalled six hours but did not face a single break point in the final as he made short work of the German who struggled on serve.

"The scheduling needs to be done better... Yesterday I started my match at 11:00 p.m. I played three sets. Finished at 1:30," Zverev told reporters.

"Until I get back to the hotel, until I eat, until I do my work with the physio because I have to prepare my body for the next day, it's 5:00 a.m.

"If you stay up until 4:00-5:00 a.m., the next day you are tired. If you do it two nights in a row, you are completely dead. You are destroyed, you will not be able to do physical activity on a maximum level."

Zverev, who was the defending champion in Madrid, said he was upset as the final had lost its sheen as a result since fans expected an even contest, even though the majority were rooting for the Spaniard Alcaraz.

"Yes, most of the people in the stadium wanted Carlos to win and all of that, but nobody wanted to see a match like this," Zverev added.

"Everybody says it was a bad match, I made double faults, I didn't play well and all of that. But look at what's happening the days before, look at what's actually happening behind the scenes as well. It's not quite fair."

When asked about the allegations of domestic abuse against him -- after his ex-girlfriend Olga Sharypova said he was emotionally and physically abusive to her -- the German said it was a "difficult time" for him.

"But I hope the whole thing is coming to an end at some point. Then I can also play calmly and be focused with my tennis."