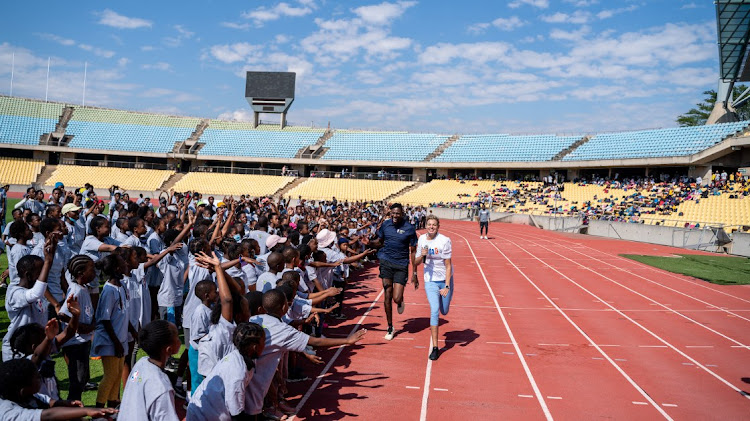 The next National Basketball Association (NBA) star in the mould of Joel Embiid, Pascal Siakam or the great Hakeem Olajuwon could be a South African.

This was evident in Phokeng, outside Rustenburg, when some youngsters performed during the Royal Bafokeng Junior NBA Africa programme at the weekend.

Most of the youngsters said they were hungry to reach the same heights as the  popular NBA stars and believed the partnership announced at the weekend would help them reach their goal. The Royal Bafokeng Junior NBA Africa programme, which was first launched in 2011, has already reached more than 100,000 youth over the past 12 years through basketball development and engagement initiatives.

More than 2,000 boys and girls took part in the fitness and life skills sessions at Royal Bafokeng Sports Palace from Friday.

Dineo Mosweu, who took part in the skills sessions, said she wanted  to follow in the footsteps of other community players who had achieved success through the  initiative.

“I’m always in an environment where there is basketball, so something like this really means a lot because a lot of kids get exposed to what I’m experiencing,” she told Sowetan.

“So I feel like it is a good thing for a community and society. A lot of people are scared of basketball because it looks like a hard sport, so this is going to encourage them to attempt [it] because just attempting can make you go far.”

The Royal Bafokeng programme is the league’s largest junior programme in Africa and has achieved a number of milestones since its launch.  More than 120 youth and 15 coaches from the programme have represented the North West province in national tournaments.

Many of the participants have also gone on to study in universities in SA ,with Ipeleng Nyatlo playing for the the University of the Witwatersrand basketball team.

Kgolagano Rakhudu, who is working at NBA Africa as elite basketball lead, came through the programme as a successful coach and administrator and was the head coach of a team that made it to the final of the  junior NBA global championships in Orlando in August 2018, where they lost to the US.

Brooklyn Nets forward Kevin Durant has said the United States basketball team has Kobe Bryant's DNA embedded in it and will look to honour the Los ...
Sport
10 months ago

The Milwaukee Bucks, powered by a masterpiece from Greek forward Giannis Antetokounmpo, captured the franchise's first NBA championship in 50 years ...
Sport
10 months ago