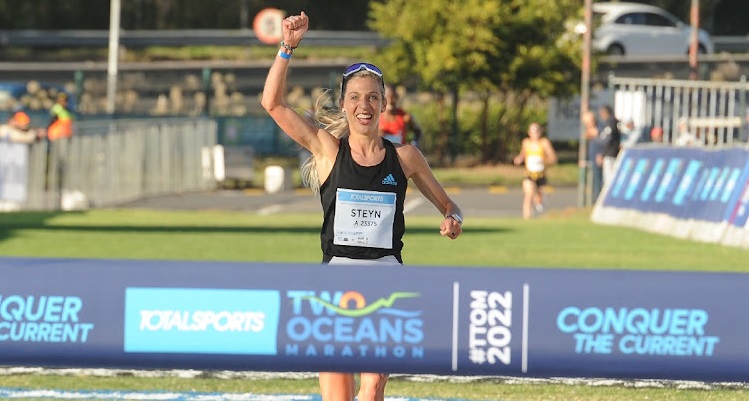 Gerda Steyn winner of the during the Totalsports Two Oceans Marathon in a new record time of 3h 29m 42s after finishing at UCT Rugby Fields on April 17, 2022 in Cape Town.
Image: Peter Heeger/Gallo Images

Gerda Steyn made history when she broke the Two Oceans ultra-marathon record with a winning time of 3hrs, 29min, 42sec in the 56km race in Cape Town.

The Two Oceans had been making a return after a two-year hiatus due to the Covid-19 pandemic. The win was third for Steyn. She improved Frith van der Merwe’s 33-year-old Two Oceans ultra-marathon record of  3:30:36.

Overall, Steyn finished in 36th place on Sunday. The Free State-born runner was pleased with how she went about completing the race in Cape Town. “It was a tactical race, we started at such a fast pace,” Steyn said.

“I looked around and I was in a group of five or six women, at a record pace. I knew we were going to see some incredible performances or struggles. I must admit for a stage in the race I was part of the athletes that were struggling a lot. I struggled a bit, but I gained new strength. I got to the top of Constantia, my favourite part of the race,” she said.

Steyn was motivated when she sensed the record was within grasp and knuckled down to pay homage to those who have supported her with an excellent win.

“I knew if I believed and put my foot down, I can still make it and defend my title. I’m very happy to have done it. I did it for my supporters and everyone who has believed in me and supported me throughout my career,” she said.

He was delighted to win his first ultra-marathon. “I came to SA after a very long time of being out due to Coronavirus. I wasn’t getting a lot of opportunities,” said Belachew after his win.

“This is my first time in a big race and particularly an ultra-marathon. First time doing a race longer than the marathon. I’m really happy to win,” he said.

Comrades Marathon Association chairperson Mqondisi Ngcobo says they are overwhelmed by the rate of entries for the ultra-marathon which will be on ...
Sport
3 months ago

Comrades opens up for unvaccinated runners

Unvaccinated runners will be allowed to take part in this year’s Comrades Marathon as long they submit proof of a negative Covid-19 test taken within ...
Sport
3 months ago

Runners who missed out on the 2020 Comrades will get first dibs when the entries for this year’s edition open this coming Wednesday.
Sport
3 months ago
Next Article