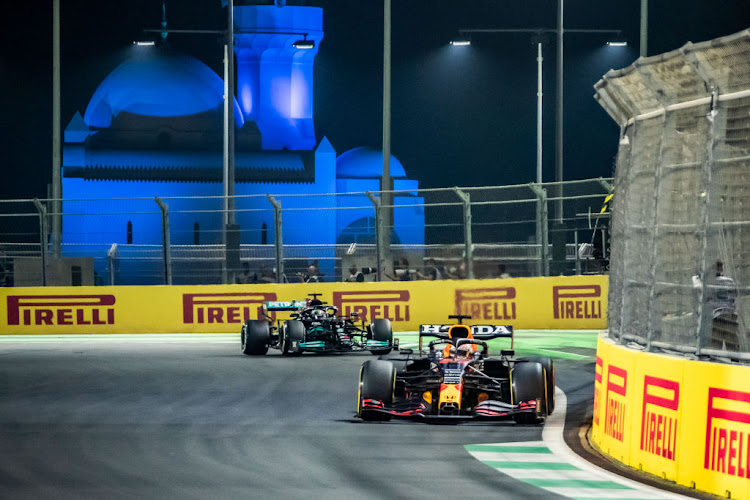 Max Verstappen ahead of Lewis Hamilton in the final stage of the race during the Grand Prix Formula One of Saudi Arabia on December 05, 2021 in Jeddah, Saudi Arabia.
Image: Cristiano Barni ATPImages/Getty Images

Saudi Arabia's Jeddah street track is set to host the country's Formula One race for at least another four years, the CEO of the event's promoter Martin Whitaker has said.

The Gulf kingdom made its Formula One debut last year as part of a 15-year deal with a night race in Jeddah in December.

It is expected to move eventually to Qiddiya, a planned entertainment resort about an hour’s drive from the capital Riyadh, once a permanent circuit has been built.

Qiddiya is at the heart of an ambitious strategy to open the economy and ease social restrictions.

“I suspect that we will run the race there for another four years,” Whitaker, who heads up the Saudi Motorsport Company, the promoter of the race, told a select group of journalists at last week's final preseason test session in Bahrain.

“That would be my thinking ... purely because I think that gives us the necessary time to build Qiddiya.

“Formula One have made it very clear in their contract with Saudi that they don’t want to be running in Qiddiya when Qiddiya is effectively a building site. That makes perfect sense.

Season four of 'Drive to Survive', the Netflix docu-series that has turbocharged Formula One for new and younger audiences, debuts on Friday with the ...
Sport
2 months ago

“Once Qiddiya is ready and ready to accommodate Formula One, then it will move.”

The 6.1km Jeddah Corniche Circuit, a thrilling layout comprising mainly flat-out blasts along the city's Red Sea waterfront and a succession of high-speed corners hemmed in by walls, served up a thriller under the floodlights as host to the penultimate round of the season last year.

Whitaker's four-year time frame includes the 2022 event, which has been scheduled for March 27 as the second round of the season this year — one week after neighbouring Bahrain's season-opener.

Whitaker said the race wanted to hold on to an early-season spot, even though being the penultimate round last year, as the title battle between Lewis Hamilton and Max Verstappen raged towards its conclusion, gave the event a high-profile debut.

“There's no doubt about it, being the penultimate race last year was fantastic,” said Whitaker.

“But, to be honest, I think we've got to remember that Saudi Arabia is now one of 23 countries around the world that stages a Formula One race.

“Wherever you are on the championship calendar, you've got an opportunity to shine and to embrace what Formula One has to offer,” he added.