Rattled by heckler, tearful Osaka crashes out of Indian Wells 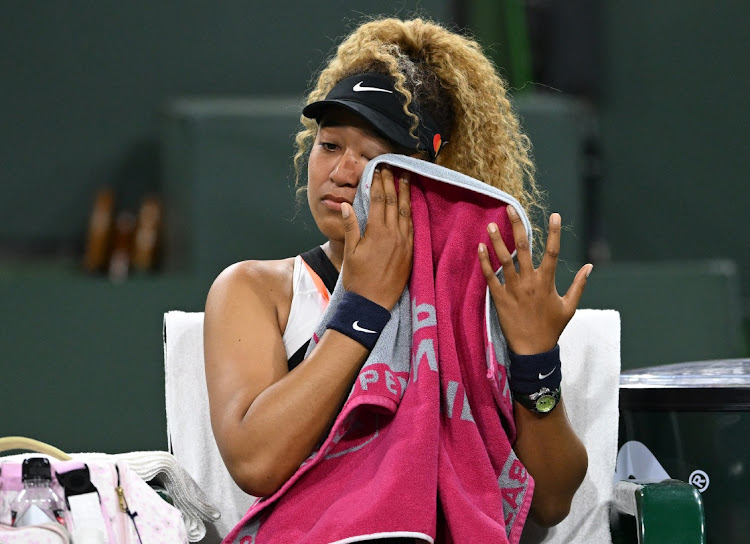 Naomi Osaka (JPN) wipes her face as she talks to referee Claire Wood after a spectator disrupted play, yelling “Naomi you suck,” before the start of her 2nd round match against Veronika Kudermetova (RUS) at the BNP Paribas open at the Indian Wells Tennis Garden.
Image: Jayne Kamin-Oncea

Naomi Osaka was rattled by a heckler early in her second round match against Veronika Kudermetova on Saturday and never recovered as she fell 6-0 6-4 at Indian Wells.

After being broken in the first game, a fan shouted “Naomi, you suck” and Osaka could later be seen wiping away tears.

After the match, the event's 2018 champion addressed the crowd on centre court, saying the incident reminded her of when Venus and Serena Williams were booed at the tournament in 2001.

“I've been heckled before and it didn't really bother me,” Osaka said while holding back tears.

“But being heckled here. I've watched video of Venus and Serena get heckled here and if you've never watched it, you should watch it. And I don't know why, but it went into my head and got replayed a lot.”

“I just want to say thank you and congratulations,” she concluded.

Osaka has been open about her struggles with mental wellness in the past and took a break from the sport following her upset loss at last year's U.S. Open. She said she was in a great place emotionally coming into the tournament.

Kudermetova stayed locked in despite the drama and continued her hot start to the year, outplaying the four-time Grand Slam champion even when she regrouped in the second set.

“It was a really tough match for me against Naomi,” she said.

“She is a great player, she's a good fighter, and I'm really happy about my performance today. I was so focused and I'm so happy to be here and play in front of you guys.”

Australian Open champion Osaka in third round after straight-sets win

Defending champion Naomi Osaka overcame a second-set blip to beat American Madison Brengle 6-0 6-4 and reach the third round of the Australian Open, ...
Sport
6 months ago

Earlier in the day, world number three Aryna Sabalenka suffered a shock loss in her first match, falling to Italian Jasmine Paolini 2-6 6-3 6-3 in the second round.

The hard-hitting Belarusian's serve was broken four times and she committed 10 double faults on a hot day in the Southern California desert.

Diminutive world number 46 Paolini said she was as surprised as anyone to come away with her first win over a top 10 opponent.

“I'm so happy. I didn't expect this moment,” she said.

“I'm just happy to be here in the third round. I think I played an amazing match. The crowd was amazing. I enjoyed it very much.”

Sabalenka was a favourite to win the event after world number one Ash Barty and world number two Barbora Krejcikova withdrew ahead of the start of the WTA 1000 tournament.

Sabalenka follows Karolina Pliskova and Garbine Muguruza out the door after both top 10 players lost on Friday.

Paula Badosa also kicked off her title defence with a 6-2 7-6(4) win over Tereza Martincova.

The Spaniard had never taken a set off the Czech in their three previous meetings and let out an emphatic scream and pumped her fists after she executed a perfect backhand volley winner on match point.

“I think the difference was I played against her one-and-a-half years ago and I've improved a lot in so many ways,” Badosa said.

“Mentally, but physically as well because I think it was a very physical match. I could see how much I improved today.”

The Tunisian Jabeur reached the semifinals of the tournament last year but Saville's relentless return game and defence ultimately won the day.

Petra Kvitova needed every ounce of strength she had to battle past Aliaksandra Sasnovich 6-7(4) 6-4 6-4.

The two-time Wimbledon champion took a knee on the court and bowed her head after firing a forehand down the line to end the gruelling contest. She will next face sixth-seeded Greek Maria Sakkari, who was a straight sets winner over Katerina Siniakova.

American Amanda Anisimova retired before the third set of her match against Canadian teenager Leylah Fernandez with an apparent illness.

In other second round action, American Shelby Rogers was all smiles after taking down Latvian 10th seed Jelena Ostapenko and fourth-seeded Anett Kontaveit needed just over an hour to cruise past Slovakia's Kristina Kucova 6-4, 6-1.

Naomi Osaka said she is enjoying her tennis again and is having fun on the Tour after the defending champion overcame an unexpectedly stiff challenge ...
Sport
6 months ago

Osaka aims to rediscover love for the game after winning return

Australian Open champion Naomi Osaka said rediscovering her love for tennis and not focusing on results and rankings were among her top goals for ...
Sport
7 months ago

The Black Lives Matter (BLM) movement marched on in 2021 but to the beat of a quieter drum as sport moved from protest to action by implementing some ...
Sport
7 months ago
Next Article