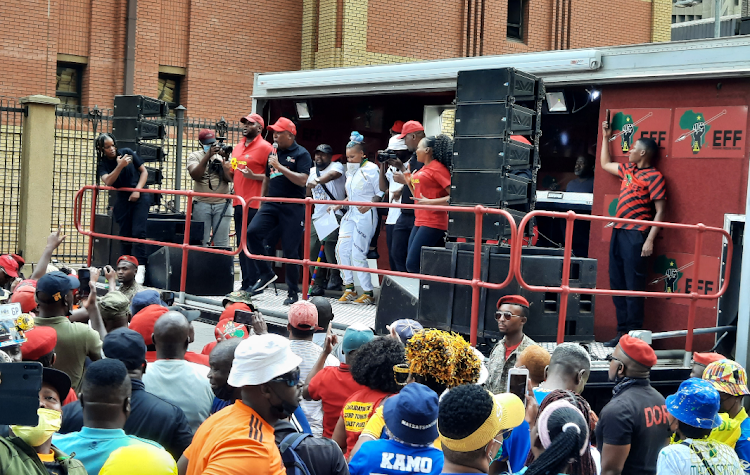 EFF leader Julius Malema took his call for the government to open sports stadiums to the office of sports minister Nathi Mthethwa in Pretoria on Thursday.

Malema led hundreds of EFF supporters on a march around Church Square before addressing them. He called for an end to wearing face masks as a precaution against Covid-19 and for stadiums be opened for spectators regardless of vaccination status.

“Do away with the mask, open the country and the economy and we will take responsibility for our own lives,” he said to loud cheers from a crowd that included supporters of the various football clubs and artists.

“All of us, we are encouraged to vaccinate, but no-one is going to force anyone to vaccinate. We must vaccinate on our own — even at the stadium, we don’t require anyone who is vaccinated or not vaccinated.

“We have said to the whole country and the world that Aids kills and use a condom. But we never went into every room to check if people are using condoms. We only encouraged them to do the right thing because it is personal choice.

“All we can do as leaders of society is to influence our people to vaccinate, but we won’t force them.”

Malema said if there was no indication from the government on when stadiums will open in the next 10 days the EFF will begin a sit-in at FNB Stadium.

“We are here to demand a simple thing: open up stadiums to open the economy. There are many people who want to say what we are saying, but they are scared — but we are not cowards.

“If stadiums are not opened in a week’s time, we are going to SA Football Association (Safa) offices. We are going to try to find our way to FNB Stadium and sit there until the following morning to show them a stadium doesn’t kill people.

“An [ANC] rally was held in Limpopo and many activities where held there and there is no report today that after that rally and activities there is an increase of corona in Limpopo.

“We had a rally in KwaZulu-Natal and today there is no report that after the EFF left corona increased in KZN. That is the only science we can use — in the absence of that they are lying to us.”

Malema also called for the dismissal of Mthethwa.

“How can you be a minister of sport when you can’t even walk at the speed of a rat? A minister of sport must inspire confidence, he must look like a sportsperson. He [Mthethwa] doesn’t do sports, arts or culture — he is only involved in factional politics of the ANC.

The SA Sports Confederation and Olympic Committee will recommend to government that stadiums host vaccinated fans at half their capacities from next ...
Sport
5 months ago

“They have neglected this department and we are calling on [President] Cyril Ramaphosa to please give us an energetic minister.”

Director-general in the ministry Vusumusi Mkhize dismissed the EFF’s picket as opportunistic.

“As a department we believe that it was a mere opportunistic act because everybody knows that government has been working on a plan to open up the return for spectators since October,” Mkhize said.

“That has been communicated with sports bodies, all of them are fully aware because minister Mthethwa engaged them where he outlined the plan that has a phased-in approach.

“The plan was explaining that when Covid-19 is at this level we will move to 2,000 fans, which is where we are at the moment. After that, as experts advise through the department of health, we will then move to 20%, then 50%.

“We should by now be at that level had it not been for Omicron, so there is a very clear plan because government cannot be reckless. We have to make sure that lives of spectators and other citizens are protected.”

WATCH | 'They are running away' — Malema and EFF picket sports minister

EFF leader Julius Malema has arrived outside the office of sports minister Nathi Mthethwa in Pretoria for a picket by the party demanding the opening ...
Sport
5 months ago

Minister of sport Nathi Mthethwa has described the planned picket by the EFF outside his office in Pretoria on Thursday as ill-advised and populist ...
Sport
5 months ago
Next Article