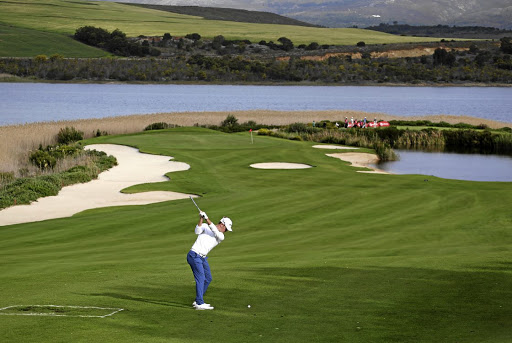 Brandon Stone won the 2021 Limpopo Golf Challenge and is expected to defend his title in the 2022 edition.
Image: Gallo Images

Organisers of the Limpopo Golf Championship have introduced ground-breaking community-based initiatives that will open doors to aspiring golfers in the province and expose them to the sport.

The fourth edition of the annual championship presented by the Limpopo Tourism Agency and co-sanctioned by the Sunshine Tour and Challenge Tour will be played at Euphoria Golf & Lifestyle Estate and Koro Creek Bushveld Golf Estate.

The 72-hole tournament tees off from March 31 to April 3 for a total purse of R3.5m with a host of entertainment and hospitality activities planned to showcase the best of Limpopo.

David Riddle, PGA SA board member, announced three initiatives that have been added to the Limpopo Golf Championship festivities.

“I am proud to be involved with the developmental aspect of the tournament and that we have come up with these initiatives,” Riddle said.

“First we will introduce young people in and around the region to golf through coaching clinics and we are speaking about 20 to 30 young people for a clinic taking place on March 30.

“Second is that we will host the Limpopo Youth Championship at one of our sister courses.

“This tournament will be held in the last week of June and we hope to host 40 to 60 youth and give them the opportunity to play golf and experience what it is like and how it feels to play in a championship.

“Lastly we are going to have training programmes for caddies in several areas in the region.

“We are excited about these initiatives and hope they will run for the next few years working with clubs.”

Champion Brandon Stone is expected to defend his title in a field that should also include two-time winner JC Ritchie, who has just missed out on the DP World card.

Other stars and Sunshine Tour champions such as James Kamte, Toto Thimba Junior, Jbe' Kruger and Hennie Otto will also tee off.

“It is difficult to say for certain now, but our defending champion Brandon Stone we hope will come back to defend his title,” Sunshine Tour commissioner Thomas Abt said.

“But we will have a host of Sunshine Tour professionals who are excited to launch their careers, including SA’s number one-ranked amateur Jayden Schaper.”

Abt said golf in SA has had a rough ride due to Covid-19, but that he was happy the Sunshine Tour still hosted in excess of 15 tournaments.

“We are hoping to have about 25 to 30 tournaments in the new season,” he said.

SA’s professional golfers will compete for almost R80m in prize money on the Sunshine Tour in the opening four months of the year.

The Sunshine Tour’s 2022 schedule tees off later this month with the Vodacom Origins of Golf Final at the Gary Player Country Club in Sun City.

The Limpopo Golf Championship will be the penultimate tournament in a record stretch of seven Challenge Tour events played on the Sunshine Tour 2022. It is expected to bring the brightest young stars from both the Sunshine Tour and Europe to the province’s fairways.

“Our province is a prime tourist destination and we have earmarked golf as one of the key tools to market what we can offer,” said Limpopo Tourism Agency acting CEO Moses Ngubeni.