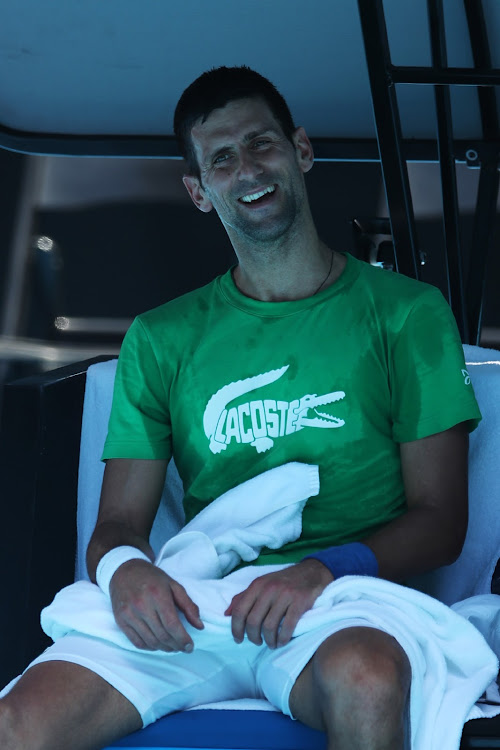 Novak Djokovic smiles during a practice session ahead of the 2022 Australian Open at Melbourne Park on January 13, 2022 in Melbourne, Australia.
Image: Graham Denholm

Should he stay or should he go? The fate of tennis star Novak Djokovic, who could get kicked out of Australia before he has a chance to defend his Australian Open grand slam title, has caught public imagination in the country like never before.

Australians' love of sport against support for the country's strict border controls, at a time of growing frustration over the government's handling of Covid-19, are fuelling animated conversations in coffee queues, front rooms and virtual workplaces.

Djokovic, the top seed and defending champion, has been included in the draw for the tournament. But Immigration Minister Alex Hawke is weighing exercising discretionary powers to revoke his visa for a second time because the government disputes the superstar's claim to have a medical exemption from the country's Covid-19 vaccination requirements.

“This visa (issue) is so difficult - but he can't stay,” a young women said to the person next to her, the pair gripping coffee cups outside a cafe in Sydney on Thursday.

“How is it possible that an unvaccinated anti-vax tennis player is allowed into the country to ply his trade and wander freely while Australian police, doctors, nurses and many others are being sacked for a similar stance?” read a letter to the Australian newspaper, after a right-wing columnist had complained of Djokovic's “shabby treatment”.

“Double Fault” and “The Joker's Unforced Errors” read the front page headlines in the top-selling tabloids in Sydney and Melbourne.

Djokovic was released from immigration detention on Monday by a judge who overturned the government's initial cancellation of his visa on procedural grounds. If he stays, he will play unseeded fellow Serb Miomir Kecmanovic in his opening round match on Monday or Tuesday.

Anger that an unvaccinated Djokovic could be allowed to play was summed up in a leaked video of a private conversation between two television newsreaders that has gone viral.

The Grand Slam champion was sneaky and lying, one said. The other said: “He is going to get away with it”.

Those in the tennis ace's court include some members of Prime Minister Scott Morrison's government, like former tennis pro John Alexander, who argued Djokovic should play.

Alexander said in a tweet the immigration minister's powers to cancel a visa, and overrule the court, were not designed to solve “the potential political problem of the day”.

Novak Djokovic is likely to face hostility both on and off court if he is allowed to play at the Australian Open but a former member of the Serbian's ...
Sport
1 week ago

Tough border policies have long been electorally popular, although criticised by refugee advocates. The Labor opposition aligned its border policy to the conservative Liberals in 2014, ditching a more compassionate approach to asylum seekers, to neutralise the election issue.

Even with a tennis star in the hot seat, that political tactic appears to be holding.

Australia is due to hold an election by May. Morrison's government had planned to campaign on its management of the Covid-19 pandemic, bolstered by strong border protection policies.

But the Omicron outbreak has seen cases soar, reaching a million cases over the past fortnight, just as quarantine restrictions were relaxed. The public mood has soured sharply over shortages of rapid antigen tests, queues for PCR testing and panic buying in supermarkets.

Morrison, who forged his political reputation as an immigration minister who was tough on borders by implementing a controversial policy of turning asylum seeker boats back at sea, in a Tweet linked the cancellation of Djokovic's visa as he arrived in Australia to government vigilance on strong borders.

But Morrison was silent in the days after the court ruling, and declined to directly comment when asked at a press conference on Thursday, only saying vaccination was a border requirement for visa holders to enter Australia.

The Labor Party said those strong border policies were damaged by not stopping Djokovic, a known vaccine opponent, from being issued a visa in the first place.

A senior Liberal party official said Australia's immigration policy has always involved tough decisions to protect the national interest, even on the eve of an election.

The minister's power was included in the migration law to allow a “last resort decision” to avoid political embarrassment, he said.

He said this border controversy was different to those in the past: “This was driven entirely by the visceral reaction of parts of the Australian public to hearing that Mr Djokovic had been given a medical exemption to enter Australia.”

World number one Novak Djokovic returned to training after being released from Australian immigration detention on Monday, posting a picture with his ...
Sport
1 week ago

The family of tennis' world number one Novak Djokovic said on Monday that "truth and justice" had won following the Serbian player's release from ...
Sport
1 week ago

An Australian judge ruled on Monday that Novak Djokovic be released from immigration detention, finding the government's decision to revoke the ...
Sport
1 week ago
Next Article