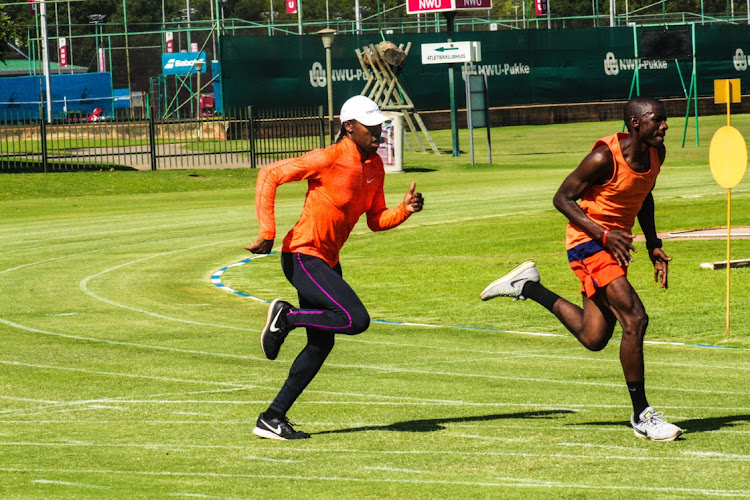 Caster Semenya's former coach Samuel Sepeng leading by example as he takes her charge through the laps during a recent training session.
Image: Koketso Mogapi

Samuel Sepeng made his name as the coach of the multi-Olympic 800m medallist Caster Semenya, winning the 2018 SA sports coach of the year award after he coached her to the world title.

Sepeng parted ways with SA’s most decorated Olympic track and field star a year later, and he embarked on a journey to coach aspiring youngsters.

His dream is to produce Commonwealth Games and World Championships medalists next year.

“It has been an up and down year with all sorts of challenges but we made it. Prudence did not compete in the Under-20 World Championships in Nairobi, Kenya, because she tested positive for Covid-19. But she ended her year with a bang when she defended her Tembisa Mile title.

“Tshepo is doing well and working hard for next season. We plan to go and compete at the Commonwealth Games and the World Championships next year,” Sepeng told Sowetan.

Sepeng, 34, said he was still learning and he hoped to become a top-achieving coach in the sport.

He is prepared to work hard and help his athletes reach their full potential, and next year could be a big year for him with a hectic schedule.

“There is still a lot that we can achieve and we have many competitions next year to try and improve our performance,” said Sepeng.

Forget about the Athletics SA (ASA) awards and prepare athletes to deliver medals on the world stage. That it is the strong message from the ...
Sport
2 months ago

Road runner Kesa Molotsane juggles her running career, employment at University of the Free State, and a role as board member of Athletics SA with ...
Sport
2 months ago

SA's 800m star Prudence Sekgodiso has made a U-turn on her threat to from athletics after she missed out on competing in the World Athletics ...
Sport
2 months ago
Next Article