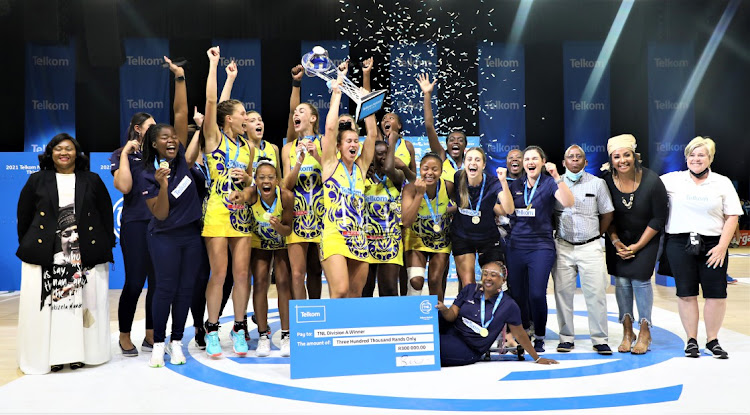 The Jaguars made history by securing their fifth Telkom Netball league title in Rustenburg after beating the Southern Stings 53-41 in the cup final at the Royal Bafokeng Sports Palace on Sunday.

Coach Jennie van Dyk’s team was never in doubt as they dominated the cup final match from start to finish.

Nicola Smith of Stings won the best defender award. Marlize de Bruin of the Jaguars walked away with the best player award in the competition.

Victorious coach Van Dyk said their hard work had paid off as she patted her players on the back.

“I am proud of my girls. They worked hard in the past two weeks. Without a doubt, they deserve to win the league title,” said Van Dyk.

The Jaguars captain, De Bruin, praised her team for their consistency and hunger that saw them end the competition as the best team. Her team collected the prize money of R350,000, a trophy and gold medals for their outstanding performance in the North West.

De Bruin could not hide her excitement for winning the best player of the competition award. “We started the tournament well and never looked back. We mixed the team with new players from different regions. We gelled well together. We came together and built every game and we had not lost against the Stings. We told ourselves that we are taking the title home,” she said.

“Winning the player of the tournament award means a lot to me. I worked hard and gave everything to netball in the past year. I am reaping the rewards of my hard work. I could not have done this without the help of my teammates. I also want to thank coach Jenny for her contribution to my game. This award means a lot for me going forward,” she said. ​

SA netball powerhouse the Jaguars continued from where they left off in the first bio-bubble in the Telkom Netball League in Rustenburg, North West.
Sport
3 months ago

The Southern Stings registered their seventh win in the Telkom Netball League by beating Kingdom Stars with a 48-40.
Sport
3 months ago

Netball South Africa (NSA) have secured high-profile friendly matches for the Proteas against Ireland, Wales and Scotland as coach Dorette Badenhorst ...
Sport
3 months ago
Next Article