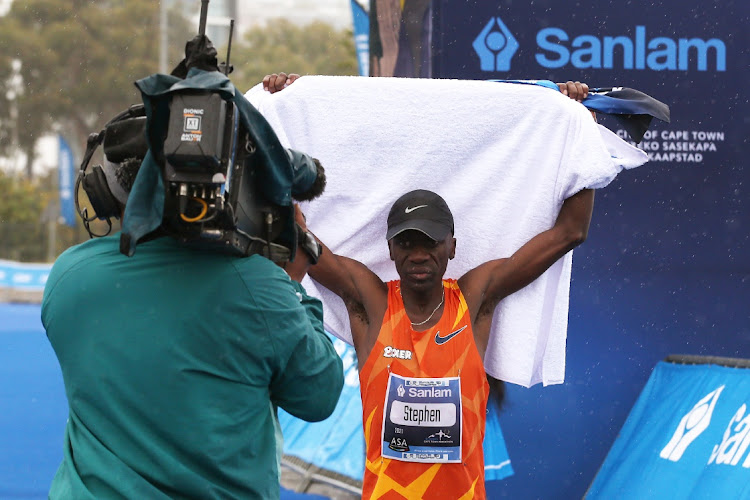 Mokoka showed his competitors a clean pair of heels in the rainy, muddy and wet conditions in Cape Town. It rained for the first 10km and then stopped and started again in the last 5km. Mokoka, who holds the course record of 2:08:31 he set in 2018, said the rain slowed him down.

Mokoka stayed with the leading pack throughout until he broke away in the last 2km to sprint for the win.

It was the first mass participation in marathon running in SA in over 18 months with 9,000 runners lining the streets of Cape Town  with 30 groups of runners starting ten minutes apart.

Four athletes tested positive for Covid-19 and were sent home.

“I am happy with the victory. The road was muddy and the rain kept on coming and going and it kept the body cooler, but [at times] we were freezing. Thank God the races are back, and we can run again. I want to thank my sponsors [as well]. If it were not for the rain, I would've run quicker to break my record,” said the victorious Mokoka.

The coach of long-distance athlete Stephen Mokoka says the veteran must redeem himself for failing to complete the Olympic marathon in July by coming ...
Sport
7 months ago

It was never in doubt that Tadu Nare was going to be crowned this year’s Spar Grand Prix 10km champion.
Sport
7 months ago

Ethiopian sensation Tadu Nare is on the cusp of making history by winning her maiden Spar Grand Prix 10km title.
Sport
7 months ago

The wait is almost over for long-distance sensation Gerda Steyn to run in her first 42.2km marathon race in SA.
Sport
7 months ago
Next Article