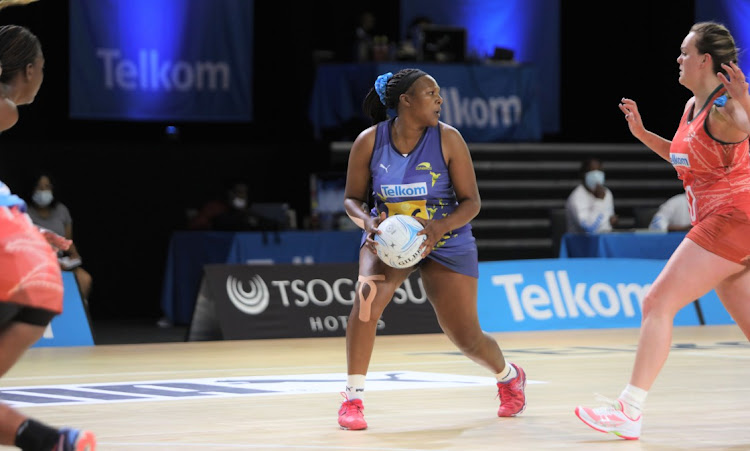 Palesa Mbukwana of the MP Sunbirds with ball in hand had a stellar of a performance that won her Player of the Match accolade.
Image: Supplied

The Southern Stings registered their seventh win in the Telkom Netball League by beating Kingdom Stars with a 48-40.

Only one goal separated the two teams in the first quarter but the Stars’ defensive unit of Jeanté Strydom, Precious Mthembu and Danelle van Der Linde were very instrumental at the back as the KZN side managed to level matters at half time. The Stings switched things up from the third quarter, attacking voraciously upfront and shooters – Nichole Taljaard and Sian Moore’s fast footwork ensured they finish off the job by sinking in those goals.

Meanwhile, the Mpumalanga Sunbirds won their first game in the second leg after beating the Eastern Cape Aloes 45-43. A dog-eat-dog first quarter ended 11-all, but it was the Sunbirds who utilised their turnover balls to lead by two and three goals in the second and third quarter respectively. The Aloes, who were mourning one of their former players and wore black bands around their arms, played it safe in the final quarter to minimise their mistakes and drew level in the last five minutes, but Sunbirds goalkeeper Tumelo Nkoe’s crucial intercept steered the team to a much-needed win by just two goals.

"I think our team needed this really badly. Everybody just came out guns blazing and we pulled through. Palesa played an excellent game and that helped a lot,’’ Sunbird’s captain Maryke Coetzee said.

"We are going to take it step-by-step because we need to have a few wins since we are fifth now, hopefully that will change after today," she said.

In the third game of the day, the Tornados kept their position at the summit of division two by beating the Kingdom Queens 42-39. Despite the win, Tornados coach Danlee Matthews will certainly be disappointed in her team's high error rate as they conceded 95 penalties in this game which saw the Queens close the gap at some point.

Queens coach Zola Starke was all smiles after the match as she expressed satisfaction with her team's tenacity showed on the court.

After the last-minute cancellation of their tour to Jamaica due to Covid-19 restrictions, the Proteas received a dose of good news yesterday.
Sport
1 week ago

Inspirational Proteas captain Bongi Msomi has been named as the official athlete ambassador for the Africa region by World Netball (WN).
Sport
1 week ago

The Jaguars are on course to defend their Telkom Netball League title after ending the first leg of the competition with an unbeaten record in ...
Sport
1 month ago

The Eastern Cape Aloes maintained their winning momentum on day two of the Telkom Netball League when they defeated the Northern Cape Diamonds 56-47 ...
Sport
1 month ago
Next Article