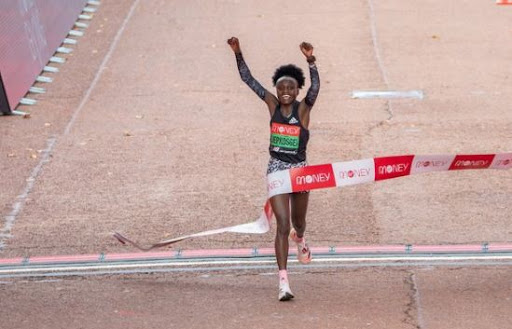 Joyciline Jepkosgei is the reigning New York Marathon champion and became the seventh fastest woman in history at the London Marathon.
Image: @LondonMarathon/Twitter

Sisay Lemma of Ethiopia was a comfortable winner of the elite men's race in a time of 2:04.01, crossing the line 27 seconds ahead of Kenya's Vincent Kipchuma with Ethiopian Mosinet Geremew third.

The 28-year-old, who was a pacemaker in London two years ago, finished 15 seconds ahead of Ethiopian Degitu Azimeraw whose compatriot Ashete Bekere came third.

"Some years back I was pacing (in) London so it was better preparation," Jepkosgei said.

"And the day (winning the race) has finally come... I'm privileged to be in London."

Kosgei, competing eight weeks after claiming silver at the Tokyo Olympic Games, was aiming for a third consecutive victory in London.

The marathon, which celebrated its 40th anniversary in April, returned to its traditional route from Blackheath to The Mall for the first time in over two years.

More than 36,000 competitors joined some of the world's best in the mass participation event and up to 40,000 took part virtually, organisers said.

Only elite races took place last year on a course around St James's Park, with amateurs last competing in 2019.