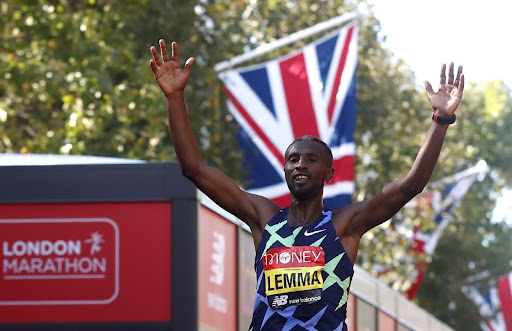 Ethiopia’s Sisay Lemma won the men’s London Marathon in 2hr 4min 1sec after breaking away from the leading pack late in the race on Sunday.

In cool and dry conditions, Lemma improved on his podium finish last year to surge ahead and seize victory, bouncing back after failing to finish the Olympic marathon in Japan.

The 30-year-old crossed the line 27sec ahead of Kenya’s Vincent Kipchumba, who took the runner-up spot for the second successive year, while his compatriot Mosinet Geremew finished third.

Defending champion Shura Kitata, who pulled out of the Olympic marathon in Tokyo after suffering in the hot and humid conditions, finished sixth in the British capital in 2:07.51 after being hampered by an apparent hamstring niggle.

Kenyan great Eliud Kipchoge, winner of four of the previous five London Marathons before 2020, was absent from this year’s event, with Britain’s Mo Farah also missing after failing to qualify for the Tokyo Games and suffering a stress fracture in his foot.

The marathon, which celebrated its 40th anniversary in April, returned to its traditional route from Blackheath to The Mall for the first time in more than two years.

More than 36,000 competitors joined some of the world’s best in the mass participation event and up to 40,000 joined in virtually, organisers said.

Only elite races took place on the course around St James’s Park in 2020, with amateurs last competing in 2019.

Earlier, Kenya’s Joyciline Jepkosgei won a thrilling women’s race in 2:17:43, as world record holder and defending champion Brigid Kosgei faded late in the race to finish outside the podium places.

Kosgei, competing eight weeks after claiming silver at the Tokyo Games, was aiming for a third consecutive victory in London. The 27-year-old rallied briefly but finished fourth in 2:18.40.