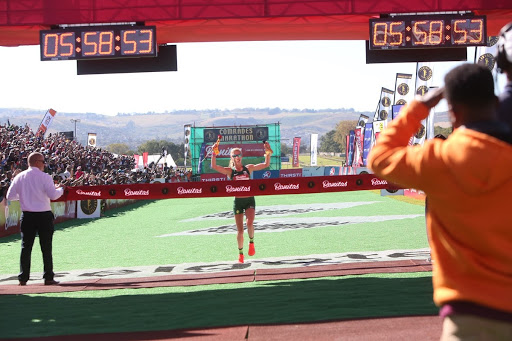 Gerda Steyn was the first woman to cross the Comrades Marathon finish line in 2019, the last time the ultra-marathon race was staged.
Image: Jackie Clausen

The Comrades Marathon Association (CMA) has announced that the centennial race will take place on an unfamiliar date of August 28 next year and not in June as has previously been the norm.

The down run between Durban and Pietermaritzburg will be run for the first time in two years after it was cancelled in 2020 and 2021 due to Covid-19.

There were differences between CMA and KwaZulu-Natal Athletics (KZNA) last year, with the former advocating for the world’s biggest, oldest and most famous ultra-marathon to take place in September, while the latter argued that a change of date‚ given the race’s popularity‚ would impact negatively on the dates of the other global road races and athletic events.

CMA had previously toyed with the idea of a September date but have now settled for August after the provincial governing body KZNA sanctioned the shift.

CMA chairperson Cheryl Winn said the move was primarily made with the health and safety of the runners in mind and indicated that the body may settle on September for future races.

“We not only endeavour to uphold the integrity of our world-class event but first and foremost aim to safeguard the wellbeing of our athletes, staff, volunteers, sponsors, stakeholders, supporters and fellow South Africans involved in staging, hosting, participating and maintaining the legacy of The Ultimate Human Race,” said Winn.

“There has been much talk in athletic circles about a proposed race date for the 2022 Comrades Marathon.

“At CMA we believe this discourse could not have come at a better time for a complete revamp of our race calendar for the future, to reimagine and design it in such a way that it benefits the build-up of endurance for the majority of distance runners in SA going forward.”

Winn went to great lengths to explain the decision and said there were several strong motivating factors but one that tipped the scales was that, in staging the race in the cooler month of September, the organisers would gain an additional two hours of daylight in which to stage the 12-hour event.

“The date of the 100-year-old Comrades Marathon has over the years shifted from as early as mid-May to as late as mid-July, originally staged on a public holiday known as Empire Day on 24 May 1921, later settled for years on Republic Day, 31 May, and with the dawn of the new SA on Youth Day 16 June, as well as on various occasions being shifted backwards and forwards to avoid clashes with the hosting of Rugby and FIFA World Cups.

“Only as recently as 2018 did the CMA eventually settle on the second Sunday in June, so, there is actually no 'traditional' date for Comrades.”

CMA said there is a scientific problem with the second Sunday of June due to its proximity to June 21, the shortest day of the year in the southern hemisphere.

CMA said this required that shortly after the Pietermaritzburg start (on down runs), thousands of tightly-bunched participants run for an hour and a quarter in the dark on narrow, potholed country roads mostly devoid of street lights.

The organisation added, at the other end of the day, after having already spent 11 hours on the road, extremely weary and wounded runners again have to navigate their way to the finish in the dark.

CMA said the situation is even more precarious for its volunteers, who have the responsibility of setting up and cleaning up, even further into the hours of darkness.

Another rationale behind a move to a later date in the year, said CMA, is to ensure the best possible chance against having to cancel the Comrades Marathon in these uncertain times of Covid-19, after the past two years of despair.

The coronavirus has been scientifically proven to thrive in the winter months.

Winn said CMA believes the later date will provide a greater likelihood of the sport having resumed to some sort of normality and give runners ample time to prepare.

She said it would also help clubs to stage their own races as opportunities for runners to qualify and enable a smooth and logical build-up of events leading up to a race of such magnitude.

Details of the entry process, qualifying criteria and other race information will be confirmed at the official media launch, the date of which is yet to be announced.

The race will finish at the Moses Mabhida Stadium in Durban.