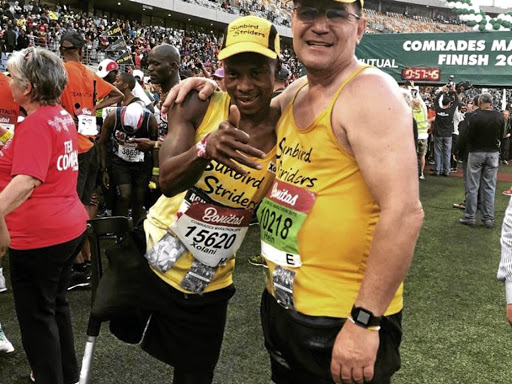 His mentor, Hein Venter, wrote in a Facebook post on Monday night that Luvuno had been “a son to me, a friend to many and a hero to all who were inspired by your incredible bravery and appreciated your humility”.

He did not reveal the circumstances of Luvuno's death, only saying “this ending was all so unnecessary”.

Venter also confirmed the news to TimesLIVE, describing Luvuno as somebody who “loved life” and was generous in everything he did.

Luvuno's inspirational life story gripped the hearts of many South Africans. The former beggar and drug addict became a prominent athlete who ran the Comrades Marathon, among other races.

When Venter met Luvuno in 2016, he was homeless and battling substance addiction. His leg had been amputated seven years before due to cancer. He later credited Venter with turning his life around.

In 2019, Venter, who had completed races alongside Luvuno, criticised the Comrades Marathon Association for saying Luvuno would not be allowed to run the race as he did not qualify.

Luvuno ignored the decision and started the race ahead of the official start time. He stopped running at 82km.

Venter said the athlete had been a hero in the eyes of many South Africans.

Video footage of Luvuno finishing races were often widely shared. In 2019, he completed his first full Ironman in Port Elizabeth and the footage went viral.

On Facebook, fans of the athlete shared their memories of him and spoke of how his life had inspired them.