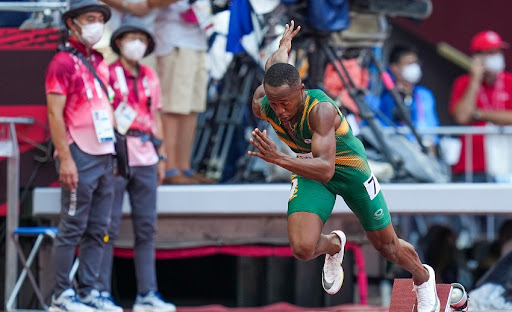 Thapelo Phora of SA competing in the first round of the men's 400m during the Tokyo 2020 Olympic Games at the Olympic Stadium on August 1, 2021 in Tokyo, Japan.
Image: Yannick Verhoeven/BSR Agency/Getty Images

SA sprinter Thapelo Phora has described his journey to his debut Olympic Games as the highlight of his athletics career, explaining how a positive drug test last year almost robbed him of his place in Japan.

The Mamelodi-born 400m athlete, who qualified for the Tokyo Olympics through the World Athletics rankings, said his ordeal when his Olympic dream appeared dashed started in 2020 when Athletics SA (ASA) summoned him to “check my emails”.

Phora recounted to the SABC television programme Sports at 10 how he tested positive for the presence of stanozolol and its metabolites and was banned for eight-and-a-half months.

“It all started in 2020 when I got tested,” he said. “The doping control came to my place. I went out for a jog and luckily my girlfriend called me and told me that they were looking for me.

“I did not even think that I would make it to the Olympics.”

The 2018 400m African silver medallist said he was out in the morning doing his daily exercise when ASA officials paid him a visit.

“I went back home and gave them my urine and my blood sample,” he said. “The next thing I receive a call from ASA telling me that I should check my emails.

“I tested positive for a substance called Stanyzerom, so I was shocked and I didn't know where to start.

“Luckily I had all my supplements, so my lawyer took them in for testing. They all came back positive.

“I was banned for eight months — that stuff was in my supplements. Luckily those [officials] who took my batch number for supplements, those supplements got sealed and they also came back positive. They were contaminated.”

Phora could not train during his eight-month suspension.

“I was innocent. But they [the drugs in sport authorities] weren't satisfied when they were told that I was innocent,” he said. “So they appealed and I had to fight the case so I was found innocent again.”

SAIDS (the SA Institute for Drug-Free Sport) appealed against the decision, but the appeal was dismissed.

The matter has since been reviewed by World Anti-Doping Agency (Wada) and no case was filed to the Court of Arbitration for Sport (CAS) for consideration of a further appeal.