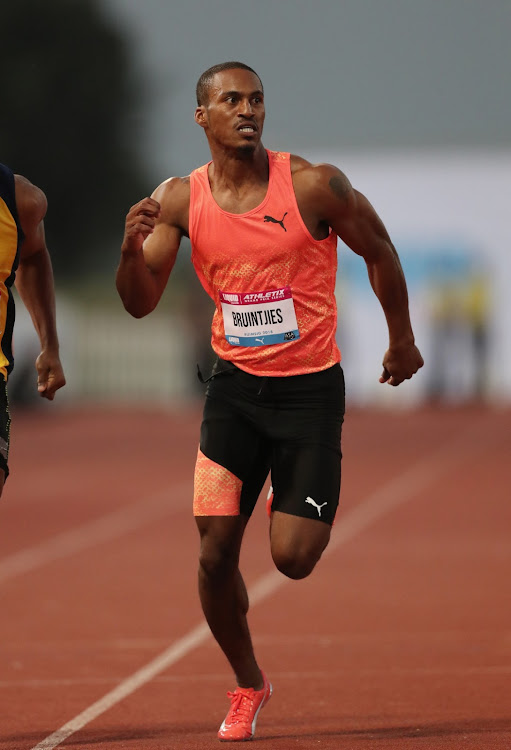 Almost forgotten sprinter Henricho Bruintjies is back training at the University of Pretoria after missing the Olympic Games due to a tendinitis injury.

His last race was when he clocked 10.08 seconds at the Tuks Stadium last year before lockdown.

Bruintjies sustained an injury and in May last year, lost his sister Cladine due to kidney failure. “When my sister passed on everything became worse, I had to deal with many emotions. The loss of a close family member and the loss of an Olympic dream,” Bruintjies told Sowetan yesterday.

“I was injured for the whole of the 2021 season and have not competed in a single race. I have been training for five weeks and have made progress. The injury was terrible and in February, I made a call to take a seven-month break.

“It was the worst seven months of my life. When I started to accept that I am not going to the Olympics, my sister passed away. It made everything worse, and I struggled with two worst things at the same time. I want to go to the Commonwealth and World Championships next year for her,” Bruintjies explained.

He vowed that no one would stop him next season.

Bruintjies won the 4x100m silver medal at Gold Coast, Australia, at the Commonwealth Games in 2018.

He started working with his new coach Paul Gorries at the end of 2019 and he has a new agent – Bradley Agnew.

Bruintjies is still with his long-term sponsor Puma and he is grateful that the sporting apparel has stuck with him during the difficult times. He receives a monthly stipend from his sponsor.

He wants to break the 100m African record of 9.84 held by SA champion Akani Simbine next year.

“There is a lot of young talent coming up and all of that. I am not old, and I can give myself another 10 years. I am not willing to step down and let anyone take my spot. I have a good relationship with coach Paul, and he knows how to get the best out of me,” he said.

SA's sensational teenage sprinter Benjamin Richardson did not expect to return from the under-20 World Athletics Championships in Nairobi, Kenya, ...
Sport
3 months ago

The SA 4x100m relay team promised so much, but delivered little at the Olympic Games in Tokyo, Japan.
Sport
4 months ago

SA sprinters fail to make cut for 200m at Olympics

SA's poor showing in track and field at the Olympic Stadium in Tokyo continued, with Anaso Jobodwana, Shaun Maswanganyi, and Clarence Munyai failing ...
Sport
4 months ago

Not even the fastest woman in the world can outrun Tokyo 2020 Olympics broadcast rights holders, with gold medallist sprinter Elaine Thompson-Herah ...
Sport
4 months ago
Next Article